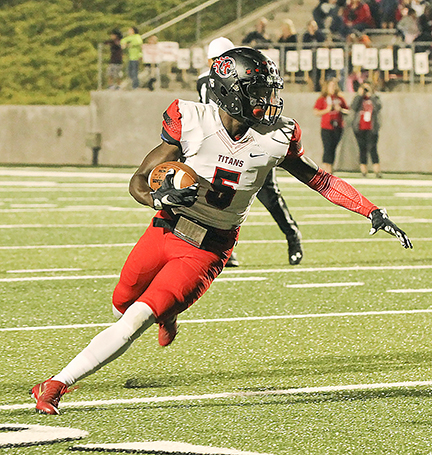 Kary Vincent Jr. of Memorial, a standout cornerback, has gotten some touches as a receiver and Wildcat quarterback in the 5A Division I playoffs. (Morgan Jones/Special to The News)

Save the turkey: Memorial has more pressing matters this holiday

Memorial has bigger dishes to fry up this holiday week.

The Titans face the Temple Wildcats at 1 p.m. Saturday at Cy-Fair FCU Stadium in Cypress.

So while most Memorial students are off this week and relaxing on break, the Titans have been hitting the practice fields early in the morning and did it Wednesday in the rain.

“We understand this is not a punishment,” senior defensive back Kary Vincent Jr. said. “This is our reward. A lot of people wish they could be practicing and getting ready to play during Thanksgiving. We are enjoying it.”

The Titans have shown off a strong defense through the first two weeks of the playoffs.

Memorial sacked Porter’s quarterback 10 times in the bi-district round and then held Elkins to two touchdowns in the area round. Elkins had 332 yards but many of the yards came on big plays late in the game with the outcome well in hand.

Senior linebacker Jaecorien Barnes has been a big part of the reason Memorial’s defense has been on point through the playoffs.

“It is amazing to make it to the third round,” Barnes said. “We are still working hard and we know we can’t take anyone lightly. There is no break for us. It is worth it for us. We will worry about the turkey later.”

Senior quarterback Reid Hesse has thrown for 2,659 yards and 17 touchdowns with 10 interceptions.

The Knights’ leading rusher is Jemiyah Franklin. He has rushed for 1,009 yards on 154 carries with 10 touchdowns in 10 games. He missed two games with an injury.

There has been no change to how the Titans have prepared this week. The intensity seemed to have kicked up following Memorial’s Week 11 loss to Vidor, but Vincent said the Titans are all in every day at practice.

“We prepare the same way ever since Week 1,” Vincent said. “We give it our all and we expect the same outcome this weekend.”

Memorial’s offense, meanwhile, has leaned on the legs of Elijah Hines this playoff season and worked to perfection last week.

Hines rushed for 183 yards on 25 carries against Elkins and junior Kobi Martin added 120 yards on 13 carries. Memorial had 379 yards rushing on 52 carries.

Senior receiver De’Andre Angelle had only three receptions last week but he would take even less than that amount if it meant the Titans advance again this weekend.

“Not everyone has the chance to practice for another week like we are,” Angelle said. “This week has been difficult in one way because it’s been early in the morning. The reason we do this is because we want to make history. We want to be the first team in Port Arthur Memorial history to win state. We want to put this team on the map. The rain today [Wednesday] doesn’t matter. We still gotta go out there and give it our all.”

Titans’ fans might also see another offensive set with Vincent on offense. He has played offense the last two weeks and scored two touchdowns.

“It’s fun helping your team in every aspect of the game,” Vincent said. “Whatever my team needs me to do is what I’ll do.”

What the team needs all the Titans to do is skip the worry about cranberry sauce and pumpkin pie. None of the players appeared on Wednesday hungry for anything other than another playoff victory.
•
Gabriel Pruett: 721-2436. Twitter: @PaNewsGabe

The young and the restless: Underclassmen serving PNG backfield well