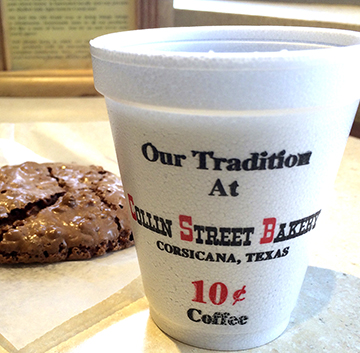 Photo by Darragh Doiron White raisins soaking in a gin bath for medicinal use.

Editor’s note: Culinary Thrill Seeking columnist Darragh Doiron is the way she is because of her mother, Jeannette Doiron. This week she’s encouraged Mom to supply her own column in this space.

Here is a tale of Gin Raisins, by Jeannette Doiron.

A friend-host of a weekly mixed group at a local coffee house was happily telling how her now pain-free father got that way. For some time he had been unable to wear a belt due to arthritic hip pain.

When leaving the venue, I got into my car, I had no intention of pursuing it right away but by the time I got even to the turnoff from Calder to my home, I gave it a pass and continued on a package store to get one of the two ingredients for a touted “miracle cure” for joint discomfort.

Didn’t mean to get on with it so quick but here I was going in to Debb’s in St. Charles Plaza. I told the approaching Messina proprietor that I was on a quest for a bottle of gin to start soaking the required golden or white raisins for the concoction. I had just heard about it for the first time but subsequent conversation with others informed me that it has been around a long time. Messina’s comment was that it must work as he sold a lot of gin for that purpose.

I got the smallest bottle possible for my test run. Another gentleman (I heard later it must have been Gerald Patrizi) looked it up on the Internet to find out some specifics like how long and in what manner to soak the raisins, how many to eat and several other bits of information. I told Messina he needed to stock the yellow raisins too as it was four days later before I got to the supermarket.

The raisins need to be soaked for a week to 10 days. I still needed more information so I looked it up on my own and the first time I just entered Ginandraisins and I was connected to a blog. Since I was there, I read it. Hilarious and while it was food related, it wasn’t about the elixir. The one I read was a woman describing how to make a bacon infused pie crust while drinking. LOL. Got the info I needed by entering Gin and Raisins Remedy.

Also got what may have been an ad associated with the site recommending Gordon’s Gin because of quantity of juniper berries in product. Raisin/gin ingredients are to be in uncovered container for 7-10 days. May put a loose paper towel over top. Once begin to eat raisins, refrigerate mixture with lid covering. Every source of info from friends and internet had different number of raisins to eat daily from 5-7-9-13.

If you have something to tell Darragh Doiron’s mom, Jeannette, about your experience with gin raisins, contact her through darraghcastillo@icloud.com