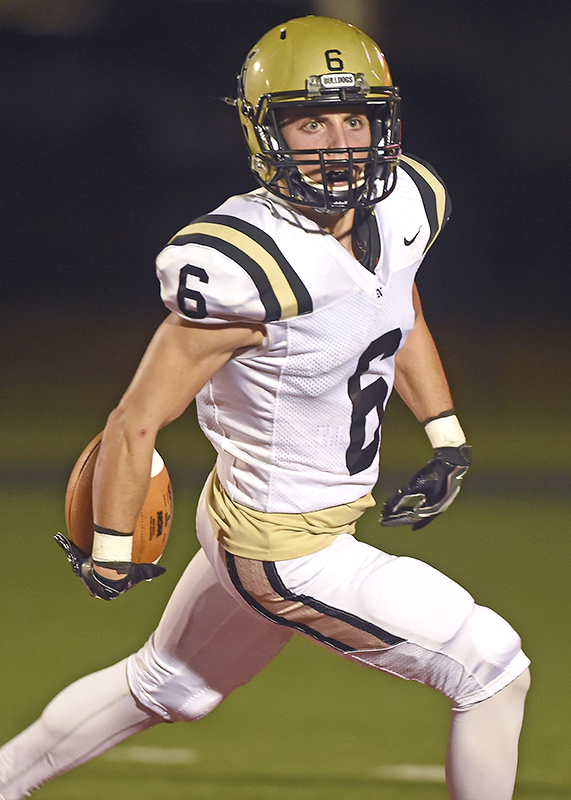 Connor Perkins of Nederland has not played since scoring this touchdown against Memorial on Sept. 30. (Brian Vincent/Special to The News)

NEDERLAND — Nederland has definitely taken to the motto “Next man up” this season.

And for good reason.

The mentality takes another step Saturday when the Bulldogs face the Ozen Panthers at 2 p.m. at the Thomas Center in Beaumont.

Nederland is also facing another “playoff” game in sorts considering the next District 22-5A loss for the Bulldogs could spell the end to any hopes of making the playoffs.

“It is an old cliché, but we know we are playing with our backs up against the wall,” coach Larry Neumann said. “I am proud of this team. I don’t get any sense they are playing with too much pressure on them and they are not uptight.”

The Bulldogs are taking steps to getting healthy this week but will also be without one of their star defensive players. Tiren Forney has an arm injury and also suffered a concussion last week against Central.

Receiver Connor Perkins is back this week after suffering an injury against Port Arthur Memorial two weeks ago. Neumann said quarterback Marshall Lange has greatly improved with his ankle injury, and fellow quarterback Blaysin Fernandez has also recovered from a concussion.

“Our team will not accept any excuses for anything,” Neumann said.

Ozen coach Edward Taylor is one man who knows no matter who is in for the Bulldogs, Neumann will have his team ready.

“What I have learned about Nederland through the years is coach Neumann does a great job prepping whoever they put out there,” Taylor said. “Coach Neumann and [West Orange-Stark] coach [Cornel] Thompson always do a great job year in, year out. He [Neumann] deserves to be listed as one of the greats in this area.”

So who should Ozen expect to see at quarterback? Neumann said he plans to use both Fernandez and Lange along with senior Reid Garrett.

“It will depend on the circumstances of the game,” Neumann said. “We are going to continue to apply each players’ abilities. All three of those guys will have their moments.”

Taylor said one of the first guys on his list to stop is Nederland junior running back Devon Simmons. He had 91 yards on 21 carries with one touchdown last Friday in a 28-21 win over Central.

“He looked real good against Central,” Taylor said. “He is really quick. [Dean] Fisher is a great route runner and they use Garrett in a lot of positions, so we have to keep an eye on him.”

Both teams understand if either wants to make the playoffs, this is a must-win game.

“If we want to stay in the hunt, we need to execute tonight,” Taylor added.

Take all the history of Thomas Jefferson and Lincoln against Port Neches-Groves out, because this one is between the 5-0... read more