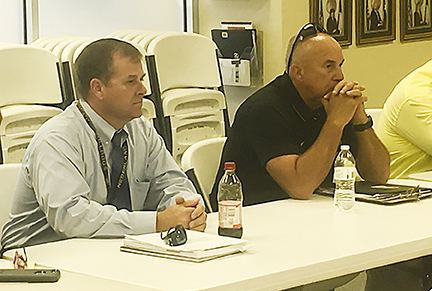 VIDOR — Nederland forfeited its win against Livingston after a 7-0 vote by the District 22-5A Executive Committee Wednesday.

The UIL last week denied a parent residence waiver request from Nederland on junior quarterback Kevin Laday. Laday started for the Bulldogs in Nederland’s 51-9 victory over Livingston on Sept. 9 after transferring from Port Arthur Memorial to Nederland before the current school year. The score of the Sept. 9 game now officially becomes 1-0 in favor of the Lions over the Bulldogs.

District Executive Committee chairman Travis Maines said Wednesday whether the Bulldogs knowingly or unknowingly played an ineligible player, the minimum punishment is the forfeit of the game. Representatives from Nederland and Livingston did not vote in the decision.

The committee also voted to privately reprimand Nederland coach Larry Neumann, who took responsibility for the forfeit. The vote was 6-1 for the reprimand with the Vidor representative voting against it.

“I don’t think there is going to any major revelation in the primaries of this,” Neumann said. “The action of the committee is predicated on my responsibility. This was my responsibility. It is not Kevin Laday, his family, it’s not our principal, it’s not our superintendent, it’s not the DEC. It is Larry Neumann, the head football coach responsible for PAPF forms (Previous Athletic Participation Form) to be done totally and completely.

“It was an oversight on my part for which we are paying dearly. I regret that and I’ve told our seniors I regret it for them primarily. I regret it for our football team generally. We talked about this about a month ago and it will not be anything new to them.”

What are new now are the District 22-5A standings.

Nederland, with the forfeit official, dropped from fourth place down to sixth with a 1-3 District 22-5A record.

Central, this Friday’s opponent for Nederland, is a half game ahead of the Bulldogs at 1-2 and Livingston is now in fourth at 2-1.

Nederland principal Dr. Steven Beagle said after Nederland ISD officials review information about the situation the district will then decide whether to appeal the UIL’s eligibility decision on Laday.

“They (Bulldogs players) are quality young men and the way they have reacted to the adversity that we have had this year has been astounding in my opinion,” Neumann said. “Like I say, this is not a new thing and I expect them to react with whatever we learned today the same way they have with everything else we have dealt with.”

Nederland started its fall practices without three starters, two for disciplinary reasons and another having moved away from the district. The Bulldogs have also dealt with several key injuries this season starting with quarterbacks Marshall Lange and Blaysin Fernandez and also running back Devon Simmons.

“I’ve coached 43 years and we have had tough years in the past,” Neumann added. “Last thing you ever want to do as a player or coach is create a safety net and blame it on circumstances, officials, weather, injuries or anything else. Obviously, this specific instance, self-inflicted by me, not had that experience in my career and it bothers me greatly.

“Like I tell my players, the only thing you can do is look to the future and do what we can do about the present to get better for the future. That is what I intend to as a head coach. I feel confident our football team and coaches will do the same thing.”

The forfeit puts into serious jeopardy the chances of Nederland winning at least a share of its sixth straight district championship. The Bulldogs have reached the playoffs for eight straight seasons. The last time Nederland did not play in the postseason was in 2007 when the Bulldogs went 4-3 in district play.

The Bulldogs face Central Friday before a road trip to face Ozen the following week. Nederland then has a week off being a home game against Lumberton and then travels to Port Neches-Groves to finish the regular season.
•
Gabriel Pruett: 721-2436. Twitter: @PaNewsGabe

Imagine a world where Kary Vincent Jr. was a starting cornerback for someone else besides the Port Arthur Memorial Titans.... read more