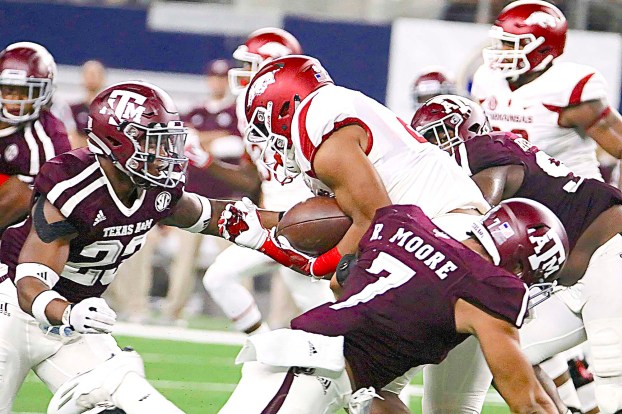 Knight, Aggies run away from Razorbacks 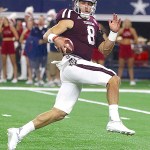 Trevor Knight of Texas A&M springs free for a 48-yard touchdown run against Arkansas on Saturday in Arlington. (Michael Sudhalter/Special to The News) 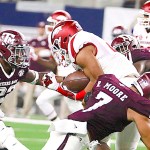 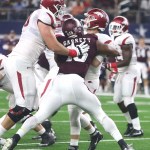 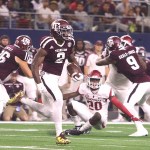 ARLINGTON (AP) — Trevor Knight had two long touchdown runs before halftime and threw a 92-yard pass to Josh Reynolds right after Arkansas was stopped three times from the 1, and No. 10 Texas A&M beat the 17th-ranked Razorbacks 45-24 on Saturday night.

Reynolds caught the ball in stride just short of midfield, and quickly shed defensive back DJ Dean on his way to the end zone to break a 17-all tie and put the Aggies (4-0, 2-0 Southeastern Conference) ahead to stay.

The long catch-and-run by Reynolds came two plays after Keon Hatcher was tackled for a 5-yard loss on fourth down, ending a 19-play drive for the Razorbacks that took 10 minutes after Texas A&M had fumbled from the Arkansas 2.

Quarterback Austin Allen was stopped twice from the 1, though officials reviewed the third-down run before ruling that the play stood. One overhead replay showed that with the help of his tight end basically pulling Allen toward the end zone show just how close the ball was to the end zone.

Earlier, the Razorbacks had to settle for a field goal after six snaps from the 2 on the same series.

Knight’s 48-yard TD run just before halftime tied the game at 17-all, after an earlier 42-yard scoring run. He finished with 10 rushes for 159 yards, the last a 62-yarder on third down in the final minute of the game.

Arkansas: The Razorbacks just squandered too many good chances. Along with that long drive in the third quarter that got them nothing, and the field goal after all the snaps from the 2, Rawleigh Williams fumbled just short of the end zone in the first half when it looked like the Razorbacks were about to go ahead by 10. Instead, the Aggies went for the tying field goal. Allen did prove his toughness, never missing a snap while completing 28 of 42 passes for 371 yards and two touchdowns even after suffering a bruised chest after a hard hit on a third-down incompletion midway through the second quarter.

Texas A&M: At 4-0 for the third straight season, a first since 1939-41, the Aggies finished strong against Arkansas for an emphatic victory after needing overtime to beat Arkansas the last two years. While it remains to be seen if they can truly challenge No. 1 Alabama for the SEC West title, Knight looks comfortable, and took advantage of some run opportunities while also throwing for 225 yards and two scores. But the Aggies may be without one of their receivers after Rickey-Seals Jones suffered an apparent left ankle injury before halftime.

Texas A&M: Aggies play away from Kyle Field for the third consecutive week when they go to South Carolina next Saturday.

Fall has arrived. Yes, I know it certainly does not seem like it, but last Thursday was the official first... read more