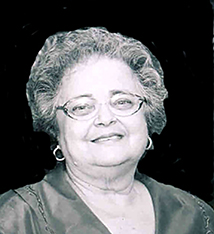 Lurie Lee Duhon Domingue, 80, of Port Arthur died Friday, September 2, 2016 at her home surrounded by family and friends. She was born March 26, 1936, in Port Arthur, Texas to Jennie Lee and Ovey Joseph Duhon.

She was a devoted member of St. Charles Borromeo Catholic church in Nederland and was an active member of the Woman’s Guild, Altar Society, Keenagers and Red Hat Society. She enjoyed spending time with her family and friends, sewing, gardening, playing bingo and trips to the casino.

Lee is preceded in death by her husband, Kelly Domingue, her parents, her sister Deloris Travis and her brother, Ovey Duhon, Jr.

She is survived by her daughters, Judith Taylor and her husband, Bart, of Mauriceville, and Nancy Prince of Port Arthur. Her grandchildren, Blake Taylor and his wife Christina of Houston; Josh Taylor of Groves; Jacob Prince of Groves and several great grandchildren. Also her sister, Helen Nunez of Dallas and brother, Rodney Duhon and his wife, Patricia, of Beaumont.

A gathering of Mrs. Domingue’s family and friends will be from 5 to 8 P.M. on Tuesday, September 6, 2016 at Clayton Thompson Funeral Home, Groves, with a rosary being prayed at 6 P.M. A Mass of Christian burial will be at 10 A.M.Wednesday, September 7th at St. Charles Borromeo Catholic Church in Nederland. Emtombment will follow in Greenlawn Memorial Park in Groves.