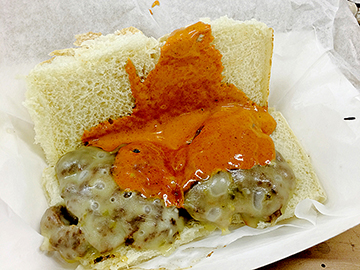 Who’s the boss at Boss Burger? Joe Oates and Mary Fuller are owners of the Nederland-based food truck offering burgers made from ribeye and chuck roast. Go on Facebook to find out where they’ll be. Oates said downtown Port Arthur will be getting their flavor often. I had a slider the other day with what I believe fans call bacon-infused sriracha mayo. It all smelled so enticing and I want to head back for the full-on burger.

Oates said he wants to “bring the burger back” to people. He elaborated by saying he wants his customers to be taken back to a burger the enjoyed on the porch as children. He’s after nostalgia.

“I guess I want to hear them say that,” he said.

Do you have
a waffle iron?

I do not need the temptation of a waffle iron. Here’s an idea for those of you who do. I recently attended a breakfast buffet where chefs put little rounds of cinnamon rolls into irons and produced a waffle-print delicacy with optional toppings of bourbon syrup, whipped cream and candied pecans. The table was strangely devoid of conversation because diners were so focused on this meal. At one point I was using my bacon strip like a chip to scoop up the fluffy cream.

Some non-Texans at an event were baffled by Frito bags already opened on a table. They picked them up and they were heavy, with meat and spices. “Tacos in a bag” is what they called them. Bless their hearts. Down here in Texas, Frito Pie is a real thing. It was a pleasure to witness their experience.

HEALTHY LIVING: Fitness overuse injuries and how to avoid them

Thinking of starting a new physical activity program or ramping up your current training routine? If so, you may be... read more