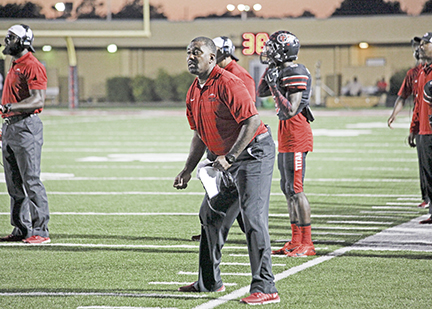 Port Arthur Memorial coach Kenny Harrison and the Titans learned Friday the team will drop to Class 5A for the 2016-18 sports seasons. (News file photo)

UIL cutoff numbers released, Titans to drop to 5A

Even though his team was eliminated from playoff contention a few weeks back, Port Arthur Memorial coach Kenny Harrison was thrilled Friday morning.
The UIL released the conference cutoff numbers for the 2016-18 realignment Friday morning.
Class 6A has a cutoff at 2,150. Port Arthur Memorial turned in 2,098 students.
This means the Titans will drop to the 5A ranks along with Mid County schools Nederland and Port Neches-Groves. Class 5A cutoff is 1,100 to 2,149.
“We are very excited,” Harrison said. “The main reason is it will cut out the traveling back and forth to Houston and we will be on a more level playing field.”
It is likely the Titans will join the current District 22-5A. Goose Creek Memorial reportedly turned in 2,213 and will move up to Class 6A.
The Titans could likely be in a district with the Bulldogs, Indians, Beaumont Central, Beaumont Ozen, Lumberton, Vidor and Baytown Lee.
Goose Creek Memorial could take the Titans place in 21-6A and compete with North Shore, Channelview, Baytown Sterling, La Porte and Beaumont West Brook.
“The numbers make a major difference,” Harrison said. “I remember playing Deer Park’s freshman team a few years ago and they ran out about 75 kids. We had about 25 on our team. Those numbers catch up to you over the years.”
Harrison said there was also a problem with the sub-varsity games that are playing on Thursdays starting at 4:30 p.m.
“Parents were unable to attend those games in Houston,” Harrison added. “Plus, we had coaches over in Houston on Thursdays coaching in those games who had to turn around and make the trip again on Friday. Hopefully now, parents will make more games when we are playing a little closer to home.”
PN-G turned in 1,440 students and Nederland is at 1,596.
Beaumont Ozen coach David Suggs reported Friday the Panthers turned in 1,082, 18 students below the low-cutoff number for Class 5A. Suggs said Ozen would petition to the UIL to stay in the 5A ranks.
The reason to opt to stay in the 5A ranks is due to travel expenses. Ozen would likely be in a district with Huffman, Cleveland, Jasper and Livingston.
The UIL will announce the realigned conference districts on Feb. 1.
“It is a great feeling,” Harrison said. “This is going to be great for our communities. We hope to have true rivalry games with teams in our immediate area. That will be good for everybody. We are looking forward to competing against some quality 5A opponents.”

HOUSTON — Port Arthur Memorial seemed to be in control for much of the game and got 23 points from... read more