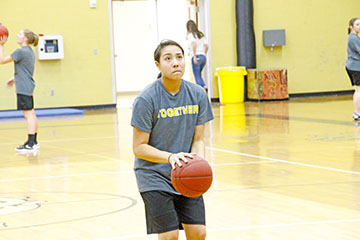 The first four­year class under coach Anna Benefield’s tutelage at Nederland will graduate this spring, and they don’t want to leave the basketball court without making the 5A playoffs.
“We’re always trying to be better,” senior post Sara Pierce said. “The better we get, the better we’re prepared to be.”
The Lady Bulldogs have come close to the postseason in recent years, finishing fifth in district play during Benefield’s first two seasons and sixth last season (record unavailable). Benefield thinks her senior class, along with a long list of juniors, can be the group that gets Nederland over the hump.
They’re counting on attitude as the main ingredient.
“We definitely work a lot on having a positive attitude, working hard for each other and as a team,” Benefield says. “Attitude can affect a lot of areas in your game, and if you don’t have the right attitude, it can hurt you on and off the court.”
Senior guard Christine Porterfield is looking for the Lady Dogs “for us to get along and actually work together and not argue like we did before and just have fun with it.”
Part of the attitude Benefield’s looking for is belief and confidence in themselves, which she said she’s seen during practices.
“Every year, we’re in a competitive district and we’re competing,” she said. “Now, we’re in position to compete even harder and get past that hurdle.”
Nederland will count on a balance of guard and post play, with Porterfield leading the way in the backcourt and Pierce trying to give opponents fits in the low blocks despite her 5­foot­6 frame.
Statistics from last season, however, were unavailable.
A playoff berth this season will give the junior class much to build on for next season. Benefield and the Lady Dogs, who begin the regular season Tuesday at Hamshire­Fannett, have taken this in much consideration, trying to make District 22­5A’s top four this season.
“I’m very, very excited and I want to see where we’re going to be,” Porterfield said. “We have some things in store this season.”