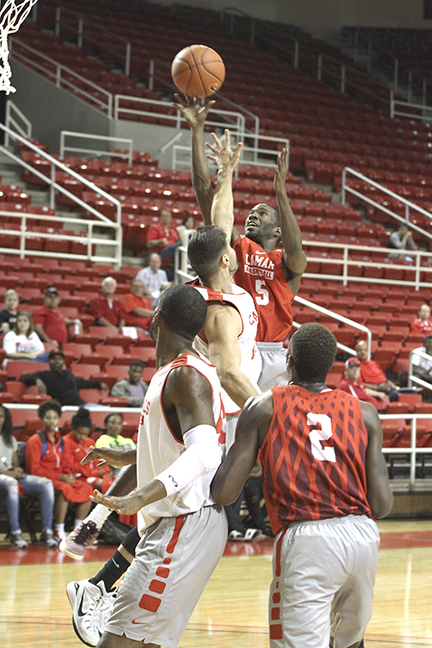 Lincoln Davis of the Lamar Red team shoots over Preston Mattingly of the White as LeMon Gregory, foreground left, and Dorian Chatman (2) position for the rebound Tuesday night in the Montagne Center. (Tommy Mann/Special to The News)

BEAUMONT — The Red and White teams for Lamar combined for 91 points in two 12-minute halves of Tuesday night’s scrimmage.
While that’s a good offensive result, it’s the defense coach Tic Price had a problem with.
“I still think we’ve got a ways to go,” Price said. “People say, you’ve got to win championships based on your defense. And, to me, this game was more for the fans to see. I don’t think, defensively, we shined. I think, offensively, we made the fans happy, but the coach wasn’t very happy with defensive part of it.”
Lamar opens the regular season Nov. 13 against Austin College at 7 p.m.
Junior transfer Lincoln Davis scored a game-high 17 points, Port Arthur freshman Dorian Chatman nailed down 10, and the Red overcame a slow start to score a 49-42 victory inside the Montagne Center.
“Really, I just had open shots,” Davis said. “My teammates got me the ball, and it just made me look good, to be honest.”
Davis, a Pittsburgh, Pennsylvania, junior guard who transferred from Lubbock’s South Plains College, connected on 3 of 4 three-point attempts and 6 of 11 from the field overall. He also had five rebounds in 23 of the game’s 24 minutes.
“I try to get to the hole a lot,” Davis said. “I try to get to the basket and use my athleticism, but mainly I’ve been working on my outside shot to expand my game.”
Davis and Chatman combined for eight points during the Red’s 15-1 rally to build a 23-16 lead. Chatman flushed a two-hand dunk to give the Red its first lead at 16-15.
The White, however, started the game with a 7-0 lead.
Chatman made 5 of 10 from the floor and gathered eight points and three assists in 17 minutes.
“I was a little nervous tonight,” the 6-foot-6 forward said. “More people showed up than I expected tonight. I had some friends and family in the crowd, and I could hear them. It put some weight on my shoulders.”
The Red, which shot 45.5 percent from the floor, connected on 57.1 percent (8 of 14) in the second half and held the White to 36.4 percent (16 of 44) for the game.
Equally as concerning to Price was the free-throw shooting by both teams. The Red shot the best, making 6 of 13 for 46.2 percent.
Nick Garth had 10 points to lead the White, and LeMon Gregory nearly pulled off a double-double with nine points and nine rebounds, but totaled four steals.
Price said competition for a starting role is still wide open in all positions, but he acknowledged the scrimmage gave him another chance to evaluate a team dotted with six true freshmen and two junior transfers. At least Chatman and Houston’s Boaz Williams (nine points) gave the frosh a chance to shine for a night.
“As a freshman class, we’re really talented and we’re really a good group of guys on the court and off the court,” Chatman said.