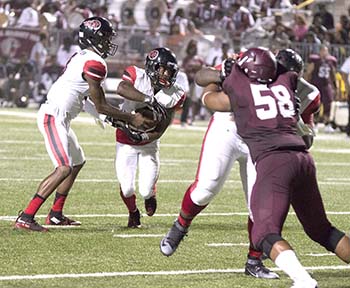 For the first time since preseason camp broke, Kenny Harrison will have a full group of Port Arthur Memorial football starters healthy, barring any injuries during this week of practice, of course.

The Titans (1-4, 0-1 in District 21-6A) could use every body, literally, to turn their season around and please their homecoming crowd.

“The key is, once again, I feel good about our chances when we’re healthy,” Harrison said.

Like the Titans, Deer Park (2-3, 0-1) is riding a three-game losing streak riding into Memorial Stadium tonight. But the Deer’s losses have not been as decisive as the Titans.

None of those plays is uncommon, but if Memorial has its way, such a play can make a huge difference — the very thing Deer Park wants to avoid for good.

“We’ve just got to do better in our fits defensively,” Massey said. “Our kids are playing hard and running to the ball but not always getting to the right spot. Speed’s an issue for us. Most everybody we play is faster than us. We have to be technique-sound to ensure we’re where we need to be.”

The speed battle could be one the Titans easily win in tonight, given Memorial finished second in the 6A state meet last May. But Harrison has placed a bit of focus this week on the Deer’s running game.

Senior Sammy Linton, District 21-6A’s leading rusher, is just 131 yards shy of 1,000 midway through the season and already has 10 touchdowns.

Senior Logan Berryhill has the potential to create big plays of his own for the Deer. He already has 502 receiving yards and two touchdowns.

“A lot of those yards Berryhill has come from play-action passes,” Harrison said. “Our DBs [defensive backs] have to be sound and not fall asleep.”

The homecoming atmosphere might be enough to keep Memorial awake all evening.