THE MOVIE GUY: ‘The Martian’ is a out of this world 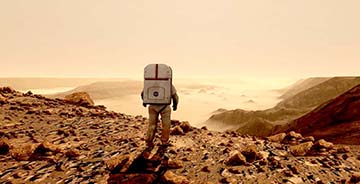 I am a big fan of Andy Weir’s best-selling book, “The Martian.” I loved the way that it used hard-science in service to what is essentially a dramatic thriller. I also loved that the main character maintained his dark sense of humor during the entire run of the story.

So I am very pleased to report that most of this survives intact in the movie version of “The Martian.” Some of it has been downplayed in order to make the film more appealing to mainstream audiences, but the essential parts of what worked so well in the book are still there to make the movie into a solid crowd-pleaser.

The story kicks off with a crew of astronauts being forced to evacuate Mars when a storm threatens to tear apart their habitat and tip over their escape rocket. During the evacuation, one of the astronauts, Mark Watney (Matt Damon) is impaled by a satellite dish and left for dead on the surface of Mars.

Watney survives the accident and makes it back to the habitat, but the spaceship has gone and he only has enough food and water to last for a few months. Even if NASA were to immediately launch a rescue mission, Watney would still need to figure out a way to survive for several years on a planet where nothing grows.

The solution is to use science. Watney figures out what he needs to do in order to survive and then applies science and engineering to the problem. He’s not always successful, but he never gives up and he maintains a wonderful, PG-13 rated sense of humor about his ordeal—the book would certainly be rated R.

Damon is superb in this role, capably keeping the audience invested in his adventure. The rest of the supporting cast, the other astronauts (Jessica Chastain, Michael Pena, Kate Mara and Aksel Hennie) as well as the NASA officials back on earth (Jeff Daniels, Kristen Wiig, Chiwetel Ejiofor and Sean Bean) are also quite good, but it’s Damon who really has to do the heavy lifting here.

Also, let’s give credit to director Ridley Scott, who turns the film into a real nail-biter. There are plenty of wonderfully tense moments in the film, which lead up to those funny moments of humorous relief. Scott is the consummate maestro here, masterfully conducting audience emotions and making this film into a real crowd pleaser.

Throw in the superb cinematography that brings the harsh Martian landscape to life and an intriguing score that emphasizes the loneliness of the story and you’re left with a film that gets just about everything right.

More than just a crowd-pleaser, “The Martian” is easily one of the best films of the year.

Movie reviews by Sean, “The Movie Guy,” are published bi-weekly in “The Port Arthur News” and seen weekly on KFDM and KBTV. Sean welcomes your comments via email at smcbrideatsbgtv.com.com.