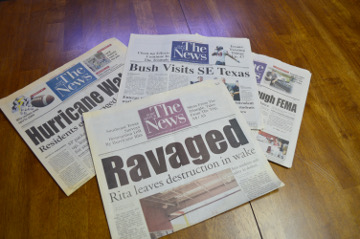 It’s been 10 years since Hurricane Rita slammed ashore, damaging Gulf of Mexico coastal communities, and yet those memories are as fresh today as a decade ago.

In the early morning hours of Sept. 24, 2005 Rita made landfall along the Texas-Louisiana coast. The events surrounding the hurricane, both before and after, set both sides of the border into unchartered waters while trying to prepare for and recover from the fourth most intense tropical cyclone ever observed in the Gulf of Mexico. 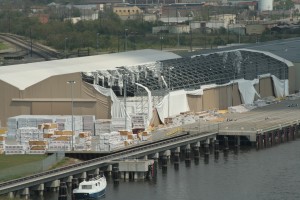 Two days before the storm hit, The Port Arthur News chronicled preparations in the Thursday, Sept. 22 paper. Southeast Texas residents were urged leave their homes and head to higher ground.

Sabine Pass residents didn’t wait for Port Arthur Mayor Oscar Ortiz to issue a mandatory evacuation order. Business owners and residents of the tiny coastal community that would be bear the brunt of the storm in Texas boarded up windows, loaded their cars, and got out of Rita’s path.

“We can expect a storm surge of 10 feet sometime between 10 a.m. and 2 p.m. on Friday, so I have signed the official papers to order Sabine Pass residents to evacuate,” Ortiz said during a 1 p.m. press conference on Wednesday, Sept. 21.

At the same time, Jefferson County members of the Incident Command System were meeting as Rita grew to a Category 5 storm, keeping in close contact with the National Weather service while county officials were handing out sandbag and providing shelter information.

“We have decided to go to Sacred Heart Catholic Church in Nacogdoches,” Kenny Blanda, then director of the nursing home said. “There we can kind of spread out on cots and keep a watch on patients.”

Forecasters two days before the storm were projecting it would hit Matagorda Bay south of Freeport, while noting that Jefferson County would be on the dangerous side of the storm.

As Rita neared the city of Port Arthur announced the use of the city’s Transit System to get people out of harms way and state insurance representatives were predicting billions in losses while oil prices jumped in anticipation of damage to offshore rigs in the Gulf.

While Louisiana residents were also readying for the storm, it was reported the death toll from the Aug. 29 Hurricane Katrina had topped the 1,000 mark. At the same time Ford Park remained filled with Katina evacuees who faced a second evacuation in less than a month.

Personnel from Entergy and other utilities were mobilizing in anticipation of widespread outages, while warning to stay away from power lines and use caution when operating generators.

The Port Arthur News offices on Turtle Creek Drive were significantly damaged when Rita struck, as were homes and businesses across Southeast Texas and Southwest Louisiana.

The News staff published its first paper after the storm made landfall on Tuesday, Sept. 27, 2005.

A looming one-word headline running across the top of the page said it all, “Ravaged.”

Editor Roger Cowles, who stayed behind to report eyewitness accounts, wrote, “The Port Arthur area looks like a war zone. The attacker was not terrorists or a foreign army, it was the devastating winds of Hurricane Rita, which slammed into the coast near the Texas – Louisiana border Saturday morning. 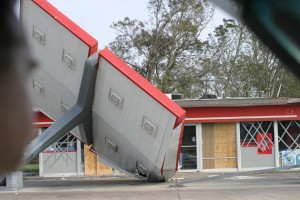 “On Monday, two days after the onslaught, city services in Port Arthur and the surrounding cities were still paralyzed, and no officials will even venture to guess when anything even near normal life will return to the Golden Triangle,” Cowles wrote.

Mayor Ortiz lost his home a day after the storm during the first and only reported house fire.

Many Southeast Texas remained out of town at hotels, shelters, relatives homes, campgrounds, churches, just wherever they found to go in the wake of the massive evacuation that claimed the lives of 107 people before the storm hit. 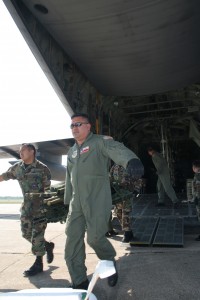 An estimated 2.5 million to 3.7 million people left their homes for higher ground making it the largest evacuation in U.S. history.

Among those fleeing Rita was Daniel Bouillon, who, with his family, left their Groves home to travel first to Jasper, before shifting course when Rita began shifting north toward the city.

Boullion found some relief in Huntsville where a church was offering free steak meals at a LaQunita Inn and Suites.

With no vacancy at the hotel, the Bouillons were ponted toward the Walker County Fairgrounds for shelter.

“We got to the fairgrounds and were afraid to go any further because we were low on gas and you just can’t find it anywhere,” Bouillon told a Port Arthur News reporter.

The the Associated Press reported the number of deaths attributed to Rita had climbed to eight, with five of those, a man, his girlfriend and her three children who were overcome by carbon monoxide from a generator to they used to power fans.

President Bush arrived in Southeast Texas on Tuesday, Sept. 27 to meet with officials after he was given an aerial tour of the devastation.

“The majority of the schools have sustained minor damage, while a few schools, like the high school, have major damage,” Mackey said.

State Rep. Joe Deshotel asked the Federal Emergency Management Agency to heed the call for assistance in Jefferson and Orange Counties, while stating the agency was slow to respond to the needs of the area.

“FEMA is not here yet,” Deshotel said. “It has been three days and residents are here without assistance. We have people who need to be fed.”

Meanwhile, many of those who evacuated heeded the order that they not come home, while others attempted to come back to their Jefferson County homes. The DPS, National Guard, local police, visiting police and an army of law enforcement officials guarded the perimeters and exits, trying to prevent people from entering the county.

Among the reasons for the ban on re-entry was the lack of electricity. Entergy crews, and others across the state, worked around the clock to repair the downed lines, including 59 transmission lines in Port Arthur.

Five days after Rita made landfall, on Thursday, Sept. 29, Ortiz announced the city was readying for citizens to return to check on their homes.

“We might experience some kind of unforeseen upsets in repairing the city, but we are hoping to reopen Port Arthur by Friday,” Ortiz said.

At the time, the only vehicles allowed through the blockade were refinery employees, contractors and emergency personnel.

Medical Center of Southeast Texas announced the hospital would be ready to reopen a day later, while a Disaster Medical Assistance Team, a 21st Century version of a MASH unit, took to he streets to help those in need.

The News reported construction was coming along at Central Mall, where hurricane winds had shifted air conditions around causing roof damage and flooding inside the stores.

While Ford Park had been home to thousands of Katrina evacuees just weeks earlier, the park was repurposed as a staging area for about 2,000 emergency responders.

Lights started slowly coming back on nearly a week after the storm, and President Bush announced FEMA would be giving those who qualify in a nine-county area expedited assistance of $2,000 per household.

The News reported for the first time the devastation at Sabine Pass where, “the nauseating smell emanating from ponds of standing black water saturated with chemicals now fills most of the community’s air, leaving it hard to breath.”

A week after the storm, thousands of Southeast Texans were allowed to return to the their homes, if only for a little while.

Local mayors urged residents to come in and look, clean up a little, then leave.

Ricky and Robin Gutierrez, and their two children, came back to check on their Nederland home after evacuating to an in-laws in Magnolia, Texas.

“We left at 7 p.m. Thursday and had a hard time getting out of town. You couldn’t even get on the highway, the couple recounted. “Then on U.S. 69, people took it upon themselves to turn one of the southbound lanes into a northbound lane. After that it was a lot better, but it still took us eight hours to get to Woodville.”

From there, the couple tried to get to Lufkin, but were turned away before a quick call to the DPS rerouted them to Magnolia.

Crossing I-45 in Huntsville was a nightmare, the couple told The News.

“It was wild, it felt like the end of the world,” Ricky Gutierrez said. “People were just walking around in the middle of the night and people were sleeping on top of cars. But we made it to Magnolia in 12 hours.”

By Oct. 3, the newspaper was reporting Southeast Texas was under attack from mosquitoes — an enemy that had infiltrated the area so heavily that the U.S. Air Force was called in.

Though still not safe to drink, water service returned to Sabine Pass by Oct. 5.

Ortiz said damage to the lines in Sabine Pass were severe. 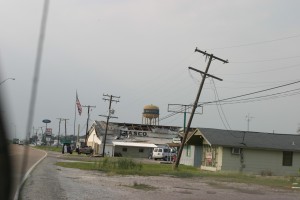 “I have asked FEMA for $6 million already,” Ortiz said. “I don’t’ know how much we will get, but I am asking. I know we are going to need at least $2 million to replace the Sabine Pass fire station.

Some semblance of normalcy began to show by Oct. 5, when in keeping with a Jefferson County action, Port Arthur’s curfew was extended from 10 p.m. until 7 a.m. along with other Mid-County cities.

Mail service had also returned to the area, and local schools were announcing tentative start-back dates.

At the same time, 140 ambulances and 300 emergency personnel began to arrive at Ford Park to help shift Katrina evacuees from Southeast Texas to San Antonio.

In a full page ad taken out by SouthTrust and Wachovia 12 days after the storm on Oct. 6, the effects of Rita were perhaps summed up best, “Sometimes the hardest part of living through a disaster is picking up the pieces…In this difficult time, one thing is certain: We’re all in this together.” 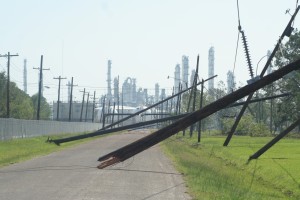 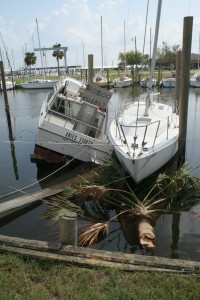 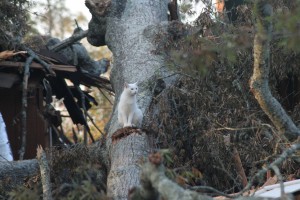