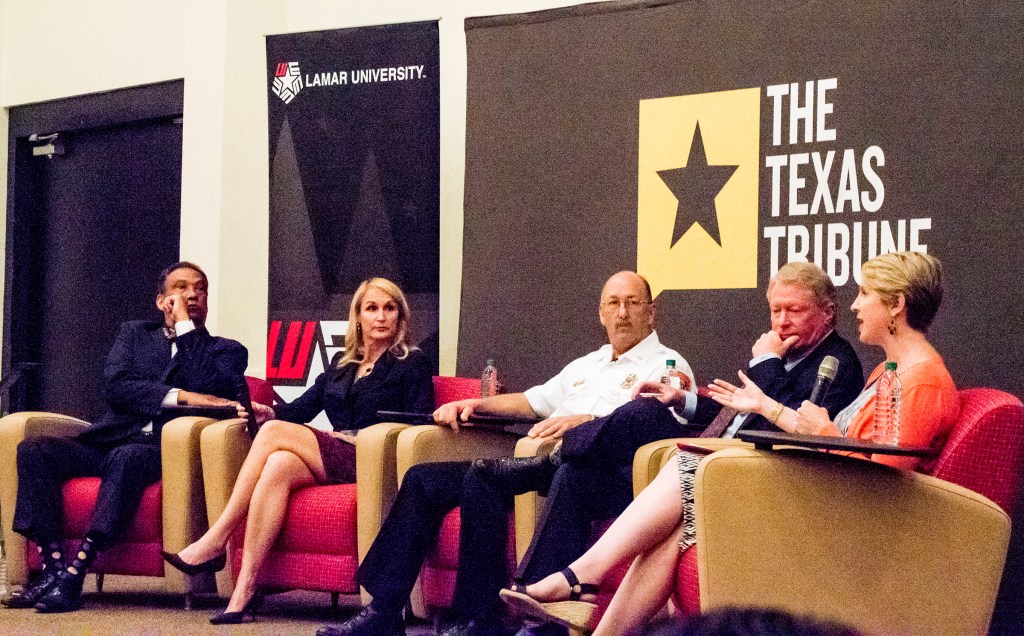 Texas Tribune Editor Emily Ramshaw, right, leads a panel discussion of local state dignitaries about the 10-year anniversary of Hurricane Rita at Lamar University in Beaumont Tuesday afternoon. “The Road from Hurricane Rita” panelists discussed the devastation and recovery efforts after the storm.

BEAUMONT — Most Southeast Texas families remember exactly what they were doing a decade ago — watching weather updates from a safe location or bracing their homes as best they could against Hurricane Rita.

Carl Griffith — the former Jefferson County judge who called for a mandatory evacuation in the days leading to Hurricane Rita striking Southeast Texas with winds of 120 miles per hour — said Tuesday afternoon it frightens him how many Jefferson County residents chose to stay despite the evacuation order.

“It’s scary to know there are so many people who stayed and would do it again. My concern now is educating people,” Griffith said in a panel discussion Tuesday afternoon. “We’ve still not had a direct hit. Think about that. Our fear when we were watching Rita come in was all that water coming over the seawall in Port Arthur. We reference it with Rita, and secondly with Ike, but I don’t think there’s enough understanding what that storm could have done.”

Griffith — one of four panelists to share his memories and lessons in “The Road from Hurricane Rita,” a Texas Tribune discussion at Lamar University in Beaumont Tuesday — said if Hurricane Rita had directly hit Jefferson County as a Category 5 storm, the water would have washed over Mid- and South County up to I-10 in Beaumont.

“When we were driving through the cities afterward to check on our infrastructure — to see the destruction of Mother Nature and what it could do to our homes — it looked like pictures of cities you see that have been bombed. We still have to be fearful of what would happen with a Cat 5 and not get complacent because it hasn’t happened yet.”

Brad Penisson, a captain with the Beaumont Fire Department, said there were helpless moments for the first responders who stayed during Hurricane Rita — something all residents thinking of riding out future storms should consider.

“The night Hurricane Rita hit, there was a structure fire and the closest we could get our trucks to it was two blocks away. Our firefighters were climbing over trees to put out the fire before it burned the entire neighborhood down,” he said. “In the wee hours of the storm, we could see houses burning — and we could not get to them. Three houses burned down, and as a firefighter to watch and not be able to do anything — that’s my job, and I couldn’t do it.”

Penisson said one thing Jefferson County did well during the storm was work together to solve problems.

“We were able to get our people out, and our plans are continuing to improve through that (the Sabine-Neches Chiefs Association) and our emergency planning meetings. We meet and tweak our plans often,” Penisson said.

State Rep. Joe Deshotel said he’s reminded of Texas’ progress since Rita every time he travels to Austin and sees the contraflow lanes to get coastal residents to safety quickly in the event of another devastating storm.

“We made eight lanes going toward San Antonio and Austin in case of evacuation,” Deshotel said. “With all the new contraflow lanes, that 14-hour trip it took to get to Austin during Rita will take much less time.”

“We’re going to continue to improve, because hearing your stories helps us improve,” Mamula said. “Mother Nature is unknown to a lot of us, and she can be brutal. It changes your life. All of you have experiences and lessons learned. It’s up to you to share them, so we can all learn.”

Emily Ramshaw, editor of the Texas Tribune and moderator of the Tuesday panel discussion, invited all the attendees to stay after the program and share their hurricane stories with the panelists and on video for a Texas Tribune project.

“It’s said we learn from experience. But if it’s painful or expensive, it’s best to learn from others,” Kenneth Evans, Lamar University president, joked. “Unfortunately, Mother Nature doesn’t always give an option.”