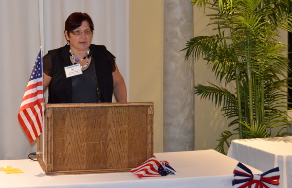 PORT NECHES — Growing up Darlene Henson Washington didn’t know the television air waves would one day be filled with reality shows. After all, reality television wasn’t prevalent in those days. But, if they had been, her family would have had their own show, or, at the very least would have been featured on an episode of Montel Williams or Jerry Springer.

Washington’s family was the kind a young girl wanted to forget, and certainly not the kind she dreamed of.

“My home was a constant state of fear and uncertainty. My father drank all the time and severely abused my Mom, me and my sisters,” Washington told a group of men and women attending Friday’s Southeast Texas Christian Women’s Club Friday.

To protect herself, Washington would imagine living in another home— one where abuse did not exist, one that was perfect.

By age 17, Washington thought she had found a way to escape. She joined the Navy, where she served as radioman, and was stationed for six years in Italy.

There, on the other side of the globe, Washington married and had children, but found she, like her mother, did not have the tools to show love and compassion to her family.

The demons that had plagued her for so long were still there, entrenched so deep that even a husband and children could not take the pain away.

“With a husband and children still not filling the void, I drank and became my father,” she said. “I wanted my husband, my children, but did not know how to have them.”

Finally her husband had enough. He left his wife, and took her children.

Washington still remembers sinking down at the edge of the bed with a beer in her hand, steeped in feelings of despair and loneliness.

As low as she was that day, alcohol would take her lower.

“The next thing I remember I was waking up in a hospital room. There were two police officers around me saying ‘you are a murderer,’” she said.

She looked around the room and saw her husband, who told her she’d been in an accident and had killed an 8-year-old little boy.

From her hospital room, she was shackled and taken to jail. “It did not matter what they did to me, jail or death,” she said. “In a 6 X 6 cell I came to the end of myself.”

There, while waiting for her sentencing hearing, a woman gave Washington a Bible.

“As the days turned into months, I began to find answers in the little Bible,” she said.

On the day of sentencing, Washington said she felt Gods’ love, but believed no sentence would be great enough to take away what she had done.

When the sentence was pronounced — 10 years of hard labor — she could not look around the courtroom.

It wasn’t that she was going to prison, but rather she could not face the boy’s family.

“Everyone wore little buttons with the smiling face of the little 8-year-old,” she recalled.

Inside prison walls, God gave her the gift of faith to believe, she said

“After spending five years in prison, I was released,” she said.

Today, she looks back at her long journey, knowing she has found forgiveness and love through God’s grace, and has even re-established a relationship with her own children.

“It’s been 23 years since my accident, 23 years of God working through me. God has shown me so much love to restore me,” she said.

Her prayer, she said, is that God will restore the family of the boy whose life she took at such a young age.

On Saturday, she will have come full circle. She starts a prison ministry at the same prison she had been locked up in for five years, and hopes God’s word will touch lives, and restore souls just as her’s was.

“God gave me the gift of faith to believe. My journey has been one of forgiveness and love,” she said.

PORT NECHES — City leaders in Port Neches continue to plan ahead as they look toward their Five Year Capital... read more