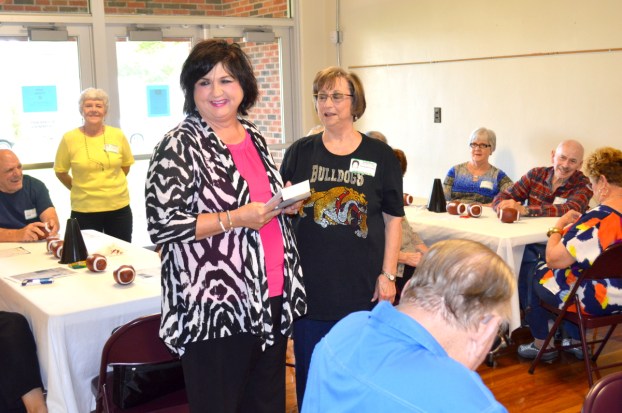 Langham Elementary School Principal Rosetta Morgan, center, is presented a gift certificate and a $200 donation by the Class of 1957. The $200 is to be used for the school’s library.

Langham Class of ’57 celebrates long ago first day of school

NEDERLAND  — The year was 1945, the Japanese had just two days earlier surrendered and The Port Arthur News ran a banner headline proclaiming “Americans to Occupy Tokyo Friday.” Locally, other article provided details of a strike closing the Consolidated Shipyard, and the city of Port Arthur overspending, yet at a little school house in Nederland a band of first time students knew little of the news making headlines.

The first graders at Langham Elementary were more interested in meeting their teachers; their new school clothes and the thick pencil and Big Chief tablet that signaled the youngsters were at the start of their educations.

It was 70 years ago, Sept. 4, 1945, when the class attended their first day of school, but for many attending a special anniversary luncheon Thursday, it seemed like just the other day.

“Seventy years ago tomorrow we gathered in the cafeteria and were introduced to our teachers to begin the first grade,” event organizer Tom Hanna said.

Memories of school lunches, floor-to-ceiling windows that let a breeze in, and teachers who were not afraid to use a paddle, were among the recollections the classmates shared over a school lunch dinner in the hallowed halls of the school they first became acquainted.

Those children were the graduating class of 1957, and they also became family, a group of close-knit friends who kept in touch over the years and never forgot where they started.

“We are a pretty special bunch of people, and most of us have remained close,” Dixie Dowden Tucker said.

Though the class numbered 124 of graduating seniors, today that number has dwindled to about 33 who regularly get together monthly for lunch just as they have for the past 10 years.

“Most of us lived here all of our lives,” Darnell Arnold Hanson, 76, of Nederland said.

Of the 33 or so attending Thursday’s luncheon about 17 actually attended their first day of school at Langham.

“Back the most teachers were not married. Miss Risinger, she never did marry,” Willey recalled.

Like most of the students of that day, Willey remembered how his mother brought him to school that first day, helped him find his class and get acclimated, but after that he was on his own.

Times were hard back then, and most people were struggling financially.

“I never did buy lunch. My parents had four of us in school at the end of World War II. Nobody had money back then,” Willey said.

Miss Risinger was very strict, a no-nonsence kind of woman.

Times were different 70 years ago as evidenced by his memories of a student named Claude who stood out from the rest of the first graders.

Not only was Claude from France, he was 14, had the beginnings of a beard, and spoke no English.

“That was how they did it then,” Willey said. “They’d start you with the first graders so you could learn the language, then bump you up a grade every couple of weeks. By mid-term Claude was caught up with his age group.”

In addition to Miss RI singer, there were four other teachers: Miss Anna Reinsure, Miss Ruth Hanesboro, and Miss Abbot.

Those teachers taught their students not only reading and writing, but manners.

While most of the memories shared Thursday were fond, the classmates all recalled the day the windows rattled and the building shook so hard that all feared they had been bombed.

“We were in the second grade, and what we were hearing was the Texas City Explosion,” Hanna said

Kenneth Langham, whose great-grandfather was the school’s namesake had a mischievous streak in school, he said.

“We’d put the Crayolas in the window and watch them melt in the sun,” he recalled.

Today, the school still stands proud, and still educates students in the hallowed halls, many of which will forge lifelong friendships just as the Class of 1957 did.