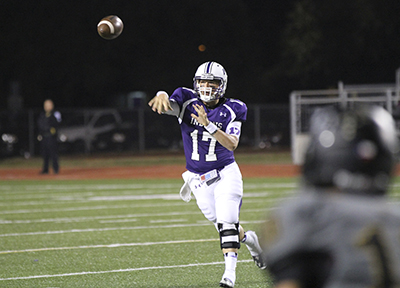 Port Neches-Groves quarterback Adam Morse and the Indians face Class 4A No. 5 West Orange-Stark at 7 p.m. Friday at The Reservation.

PORT NECHES — Adam Morse can read defenses.
He can point out when a blitz is coming. He can find the windows and throw the football downfield when the time comes to do so.
Morse does all this on video games and he said it drives his dad, Steve Morse, and brother, Brandon Morse, crazy.
What is his record versus his dad?
“I don’t know overall record but I know he has never beat me,” Morse said two days before his 18th birthday on Thursday. “I take what I learn in meetings and put it into Xbox.”
Morse, a verbal commit to Lamar, is what many folks call a high school football junkie. He eats, sleeps and breathes the sport.
He cannot remember exactly the first time he watched the Indians from the stands of The Reservation. What he can remember are his first memories of watching Port Neches-Groves football.
Morse watches the 1999 state championship finalist season so often he has the plays memorized.
The guy playing quarterback for PN-G that season is the same quarterback Morse is now tracking down in the Indians record books, Dustin Long.
“I can almost memorize the whole tape,” Morse said. “It is fun to watch them do what they did and see how they played the game. It was a different era of football. It was a lot more smash-mouth football.
“The highlight tape is my true first memory of PN-G football. Bo Wortham had a long touchdown run in the state game and he moved his arms around after he scored. My dad said I used to dance like that after he scored.”
The Morse family has a long line of athletes. Adam’s uncle Toby Morse played football for the Indians from 1997 to 2000 and his aunt Julie Morse was a pitcher and first baseman for the Lady Indians softball team that reached the state tournament in 2001.
“From the time the boys were born, they were always at the ballparks,” Steve Morse said of his sons. “It didn’t help that their dad is a die-hard PN-G fan and I haven’t missed but maybe five games since high school. The boys started playing football at the age of 5. They were so easy to shop for, for Christmas because all you had to buy them was some kind of ball.”
PN-G coach Brandon Faircloth first saw his two-year starting quarterback in the seventh grade. He did not get to know him until Morse was a freshman in high school.
Morse shocked his coach that year when he asked to do something different during a game.
“The tell-tale moment was his freshman year when he came up and volunteered to play linebacker,” Faircloth said. “We didn’t have a whole team because we had some guys out sick and we were struggling at linebacker. I had my freshman quarterback (Morse) come up and say, ‘Hey Coach Faircloth, can I go play linebacker?’ Of course I said yes. He went out there and he did a great job. That is when you know he would do anything to help his team. He would be an all-district linebacker if he played the position.”
Morse said he was not alone when it came time to play linebacker that night. Receiver Jack Giblin joined him at the position to help out their teammates.
“(Trey) Rembert got moved up to varsity,” Morse said. “Jack and I had to go in as middle linebacker against [Beaumont] Ozen. It was fun playing on the opposite of the ball. It is good to lay the wood sometimes.”
Morse is chasing down Long in the Indians record books. He came up short last year in eclipsing Long’s single season passing record. Long finished with 3,087 yards in 1999 and Morse completed 2014 with 2,937 yards. Morse did set the PN-G single season passing touchdowns record with 31.
“I am not worried about any legacy I might leave here,” Morse added. “I am just going to keep playing until my time is up, I guess.”
One thing is for certain: Morse and Faircloth have become very close over the years. It is a relationship so strong, Faircloth even thinks of his signal caller when watching college and pro games at home.
“We text a lot back and forth,” Faircloth said. “I record some things on my phone off the TV and send it to him. He is a football junkie and it shows. He has great ideas for plays and he would make a great coach.
“I will say a game plan and he is always a step ahead of and say ‘Hey, Coach, this looks good.’ I have to stop him and tell him I will get there at some point. He is ahead of me sometimes.”
Steve Morse said: “It has been very humbling experience for our family. As a father, you always dream of your child being the star player of whatever sport they love. He just so happens to love football like I do and what an amazing ride it has been so far. There has been a lot of great athletes throughout the history of PN-G football and Adam is very blessed to have his name associated with the record holders of the past.”