She dines on the rinds 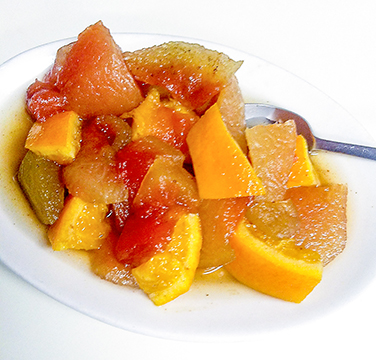 Last summer someone told me the best watermelons had a hollow sound when thumped. This year people stressed looking for yellow patches to show it had been on the ground a long time. I picked a great yellow-bellied, hollow one and near the end I recalled how much I loved watermelon rind preserves the two or three times I ever tried them.
I’d heard they are difficult to make, but the recipe sounded easy. I think the hard part is peeling the outer green off the rind. Here’s how I made a jar full. I think it’s like stone soup because I kept coming up with more ingredients out of nowhere:
Cut up chunks of the peeled rind and cover them with sugar, overnight. This will form a liquid. I added a bit of water, then cooked it on slow heat until tender.
I used up several of those sugar packets that accumulate, and used honey water from the bear bottle I got from my mother’s house. She had added water to get the last bit out. While it was cooking, I figured peel from an orange I had would flavor it nicely and add color. Some recipes call for cinnamon. I’ll need to stock up this pumpkin pie season. I found some chai tea spice that I had mixed up and put into a vintage salt shake and it worked fine.
My preserves went on some French bread my friend had brought over and the rest looks lovely in a Mason jar. I served it in a small, oval Homer Laughlin plate that I’d just got for 75 cents at a Young Life estate sale. The plate matched four others I bought at an antique co-op in The Heights in Houston, because they remind me of dining at Aunt Anne’s house.
That’s my tale of how one thing led to another to remind me of another and resulted in coffee and breakfast on my patio as the sun came out on a Sunday morning.
Oils of note
I’ve heard that avocado was once referred to as poor man’s butter. Now it’s gourmet. There’s another time to speak of a perfect separation of the flesh from the pit and the skin for a firm, cool bite. This is about the oil.
Chosen Foods has put avocado oil into a spray can that works while you’re grilling. It’s a high-heat and non-propellant spray. Makers say they use safe air pressure technology that eliminates chemical propellants and other harmful ingredients. Chosen Foods avocado oil spray can safely be heated up to 500 degrees. But guess what? A spray of it tasted great on some lightly grilled French bread.
Also look into Chosen Foods’ Sesame Oil, billed as expeller pressed flavorful finishing oil. It has a 4,000-year old history and is best kept in the fridge and used within 6 months. Once you breath in the aroma you’ll be busy drizzling onto noodles, vegetables and salads. Oil up now.
darraghcastillo@icloud.com