PAISD parents weigh in on discipline 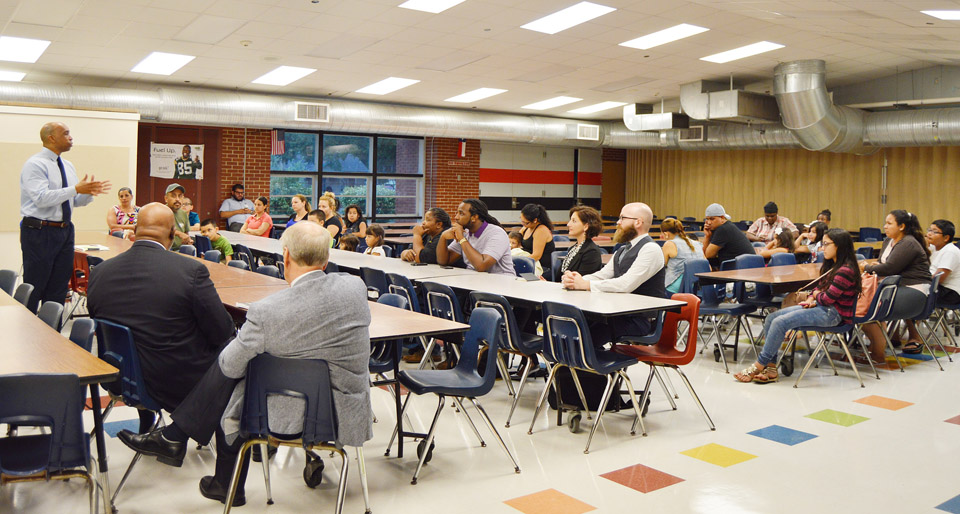 The PAISD assistant superintendent for curriculum and instruction said when students return to school Aug. 24, they will be faced with a strict — but fair — code of conduct and a network of teachers far less lenient than the district has seen in the past.

But if the district is going to provide classrooms conducive to learning for all students, PAISD Superintendent Mark Porterie added, he needs parents to inject themselves in their children’s education.

In the second of two scheduled community conversations on student discipline Tuesday, Porterie asked a group of 30 parents and students in the William B. Travis Elementary School cafeteria to work with the district toward student success.

“In order for us to teach them, we’re going to build a reputation of fairness for all students. Every child deserves to receive a quality education from pre-k through the 12th grade. If a student graduates with a strong educational background, they will have a choice. And that’s what a school district does — we create choices for your children.”

Porterie asked parents what they would change about the PAISD to create “a perfect school environment” for their children. A translator helped relay responses from many of the Spanish-speaking parents in the audience to voice more ideas.

“I want my child to feel safe when he comes to school,” one mother said. “When he wakes up in the morning, he’s excited to come to school because it’s a safe environment.”

“The teacher motivates the students to learn,” one father added. “Because if the lessons and the learning isn’t fun, (the students) won’t be successful.”

An elementary school student warned Porterie he should “check people’s pockets when they come in,” because he had a classmate bring a BB gun to class one day.

One mom said she’d had a problem with staff members at her son’s school “yelling at the kids to be quiet and sit down” in the cafeteria before school ever started.

“My son is 5 and he doesn’t speak much. Almost all the teachers I see are very nice, and some of them are even helping him get speech (therapy) to help him talk,” she said. “But having these people in the cafeteria so early in the morning starting the school day off with yelling to be quiet is not helping him feel comfortable or safe.

“I don’t want nobody yelling at my kid in the morning. If I don’t do that to my kid, why is someone up here yelling at him in the school?”

“Some people think yelling commands authority — it doesn’t,” Porterie responded. “Knowledge commands authority. If the student knows that teacher cares and that teacher knows their content, that’s going to get our educators farther than raising their voice. Raising your voice does not say, ‘I’m in control of myself, and I know what I’m doing.’ And, yes, we have to teach some of our staff that respect has to be earned, even for adults.”

PAISD Trustees Joseph Guillory II and Brandon Bartie said the district is making crucial steps toward safer schools and a community of engaged parents to support the district.

“This is something districts across the state are trying to figure out — how do we get more parents involved?” Bartie said Tuesday. “Having our parents work together with our teachers is so important for our success for our schools and our district.”

Guillory said ultimately, community conversations like the one on student discipline Tuesday help the district identify all the ways to “put the needs of our students first.”

“It’s all starting to come together,” Guillory said. “We’ve heard from our parents tonight, and we’ve stressed our message. The kids absolutely come first. Everything else is irrelevant.

“If it doesn’t help us improve test scores, improve morale in the classroom, support our teachers and make our kids feel safe and engaged in these classrooms, it’s irrelevant.”