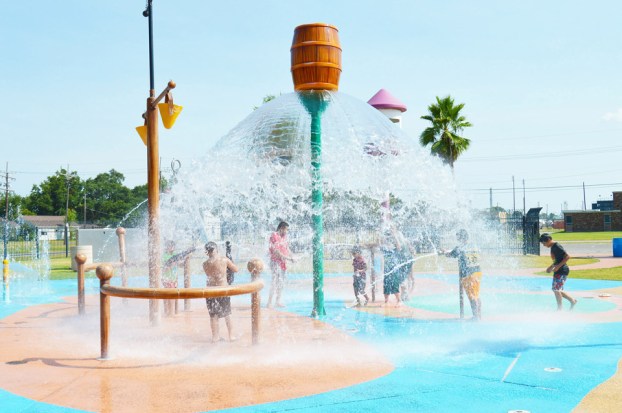 Families beat the 112-degree heat index Monday afternoon by cooling off at the Port Neches Spray Park. Parents stayed in the action, letting their casual clothes get soaked along with their children's bathing suits.

While many professionals are celebrating their desk jobs in air conditioned buildings throughout Southeast Texas Tuesday, others are preparing for another scorcher with little relief from the “oppressive” heat.

From chemical engineers grabbing Overtime popsicles and small plates of fruit on the go to Port of Port Arthur dock workers working half of their shifts indoors, supervisors throughout the region are thinking of creative ways to keep their employees hydrated and cool.

Orlando Ciramella, senior director of trade development at the Port of Port Arthur, said the port is currently operating under a “unique schedule” to keep its employees safe.

“We haven’t had temperatures like this in a long time. I’ve worked here 20-plus years, and I don’t ever remember it being this hot for this long out at this port,” Ciramella said Monday afternoon, when the Beaumont-Port Arthur region reached a high of 102 degrees and a peak heat index of 112. “We’re doing everything we can to keep the boys out of harm’s way, and it’s all about avoiding excessive time in the sun.

“We’re limiting our hours for outside activities from 8 a.m. to 10 a.m. and from 3 p.m. to 5 p.m. — so we’ve got four hours during the day when all of our employees are inside the transit sheds and working on the products indoors. We’re asking them to take more breaks in the shade, and we’re monitoring their water intake to make sure they’re staying hydrated.” 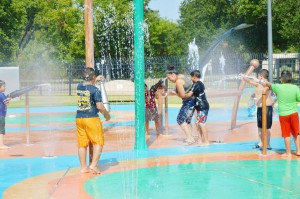 Families beat the 112-degree heat index Monday afternoon by cooling off at the Port Neches Spray Park. Parents stayed in the action, letting their casual clothes get soaked along with their children’s bathing suits.

“We’re offering lighter meals and fruit to replace their nutrients and keep them hydrated in addition to all the cooling procedures we have in place,” the spokesperson said. “We’re very cognizant of the high temperatures and making sure our workers don’t push themselves too hard in this heat. We’ve been like for this for some time now, and we’ll be on alert until the heat index drops back down into the 80s.”

Many city workers finished their shifts Monday indoors, with some heading back to their offices by 2:30 p.m.

“We’re already pulling everyone back to get as many of our workers out of this heat as we can,” Chris Duque, Nederland city manager, said Monday afternoon. “We sent out a reminder at the end of last week about the weather, trying to give everyone heat safety tips. We’re just trying to make sure to hydrate them and slow it down so they don’t get hurt. We’re taking this weather very seriously — it’s an oppressive heat.”

The National Weather Service in Lake Charles placed the Beaumont-Port Arthur region under an excessive heat warning Monday from 8 a.m. to 8 p.m.

NWS placed the region under another heat advisory for 10 a.m. to 8 p.m. Tuesday, warning “dangerous heat related stress and fatigue” could impact those working or exercising outside.

At press time, the NWS website listed peak heat index values for Tuesday could range from 108 to 114 degrees.

Monday could not come soon enough for Kenny Harrison and his Port Arthur Memorial Titans. The Titans were on the... read more