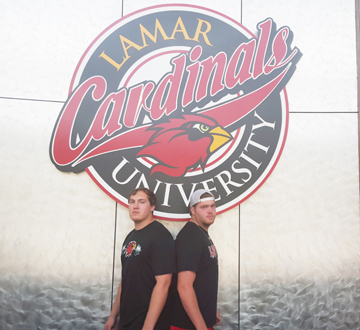 BEAUMONT — It is always nice to see a familiar face.
Such was the case for former Nederland football player Corbin Carr who has reunited with another Bulldogs star, Koby Couron, at Lamar University.
Now the duo are both set to start in the defensive line for Ray Woodard and the Cardinals in 2015. Carr enters the season penciled in as the starter at right end while Couron is slated to start at left end.
Lamar enters the 2015 season fresh off an 8-4 campaign, the best record since the Cardinals program returned in 2010. The season was made by a last-second win over nationally-ranked McNeese St., 27-24.
“We are looking good and feeling excited,” Carr said. “We weren’t picked where we want to be but we have always been underdogs.”
Lamar was picked eighth in both the preseason polls put out by the coaches and sports information directions in the Southland Conference.
Carr said there is definitely a new attitude around campus and in the Cardinals locker room after Lamar had its first winning season since 1979.
“Things do feel a lot different,” Carr said. “We did have a good season. We ended on a good note. I feel our team bonded and the chemistry is a lot better this season.”
Carr finished with 35 tackles in 2014, including 12 solo stops. He had 6.5 tackles for a loss and one asack and three QB hurries.
In 2016, not only will Carr get to play alongside Couron but he will also have a chance to play with his brother Justin Carr. Carr recently committed to Lamar.
“Got a little brother coming here next year,” Carr said. “I will get to play one year with him so that will be real exciting. Never got to play with him in high school but he is coming here now. He saw how much fun I had here. He is up for the challenge.”
Couron played in 11 games as a sophomore and picked up 19 tackles. He had a career high seven tackles against Texas College.
He said he hopes the win against McNeese now moves the Cardinals into a position to have even more success this year.
“We have been working our butts off,” Couron said. “I just can’t wait how good we can be. I know they picked us eighth and I know we can have better results than that.
“You get to prove people wrong. Nobody thinks you are going to win and you are always the underdog. A little respect would have been nice.”
Couron said he has appreciated reuniting with Carr on the Cardinals roster.
“It was comforting to have someone to go to ask what is going on and what we needed to do,” Couron said. “Playing on the field together, we already had chemistry on the field.
“We will probably mess with Justin a little bit. I never got to play at Nederland with him, either, but I can’t wait until he gets in.”
Lamar opens the season in Beaumont on Sept. 5 against Bacone College.