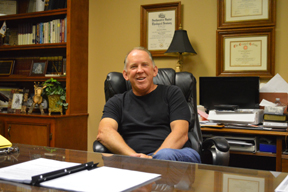 The Rev. Joe Worley, pastor of First Baptist Church of Groves, reflects on his long tenure leading the congregation. Worley will celebrate his 20th year anniversary at the church Sunday.

For the last two decades Joe Worley has preached the same sermon each first Sunday in August from the pulpit of First Baptist Church of Groves, but this Sunday he won’t.
Instead, a guest pastor will be delivering a special message to mark Worley’s 20-year anniversary leading the Groves church’s congregation.
The Celebration Service begins at 10:30 a.m. Sunday at the church, 4000 Grant Ave. Lunch will be served immediately after the service.
Though it did not start out that way, through the years the Joshua 3 passage has evolved into Worley’s anniversary sermon, taken from the same text he preached on the very first Sunday he stood before the Groves congregation.
“For 20 years I have preached the same passage of scripture on the same anniversary date. It did not start out that way, but it became fun,” Worley said.
Though the passage has remained the same year after year, the message derived from the long ago Biblical account of Joshua leading his people across the River of Jordan into the Promised Land has changed as Worley comes to understand different nuances of story, and how the message is still relevant today.
While leading the church, Worley and his wife, Cheryl, have raised a family, and established strong ties to a community he has come to love.
At 54, Worley knows his tenure with church is longer than the norm. Most pastors stay at a church three to five years before moving elsewhere.
Raised in Killeen, one of seven children, Worley’s father was in the U.S. Army, but the family did not move around since he was born at the tail end of his father’s military career.
By the time Worley enrolled in University of Texas at Arlington on a track scholarship — he was a pole vaulter — he begin to feel that God had a plan for him that was outside his business major.
“I had a deep impression the Lord was moving my heart to serve,” Worley said.
Though raised Catholic, Worley was attending a Baptist Church while in college, and served in North Carolina as a summer missionary.
He changed his major to reflect God’s plan for his life and since then has earned five degrees including Bachelor of Business Administration; Bachelor  Arts in Biblical Studies, a Master of Arts in Biblical Studies, Master of Divinity and Doctor of Ministry.
“He is extremely knowledgeable about the Bible; he studies so much,” the Rev. Charles Miller, associate pastor of First Baptist Church of Groves, said.
Not only does Worley preach and teach the truth, he lives it, Miller said.
“What you see at church is no different from what you see in the community. For Joe Worley, that is who he is,” Miller said.
This week, while reflecting on his long tenure with the Groves church, Worley remembered the first time the pastor church committee from Southeast Texas came to hear him preach at the church he pastored in Collinsville.
Worley and his wife, he said, had been praying that God would direct them to a place they could raise their family.
They found that place in Groves, he said.
“We were told by the people as we moved here it would be a great place to raise a family, and that is true,” Worley said. “The people make Southeast Texas, just great really down-to-earth people. That is the thing we attached ourselves to.”
During his tenure, Worley has seen the church grow and take on new roles in the community.
The Heritage Hall has been added, The Zone for the church’s youth, and a Family Life Center kitchen facilities have been redone.
The church has also grown to two services: One traditional and the other a praise service.
“The church has grown. We are in a phase where it has become younger, but the elders’ handprints and footprints are all over the place,” Worley said.
Jewel Gil, 76, is one of the church’s elders. She’s lived in Groves all her life, and gone to church at Groves First Baptist since she was born.
In fact, she’s still got what the old-timers called a “cradle roll” certificate — a paper signifying her family brought her to church while she was still in the cradle.
She’s heard countless sermons delivered by many of the church’s pastors, but has a special place in her heart for Worley.
In fact, she was a member of the pastor search committee — called a pulpit committee in Baptist terms — and remembers the sermon Worley preached when the Groves delegation traveled to hear him preach.
“It was something about God needing good men. He was very young, just 33 years old when he came to our church,” Gil said.
If God needed a good man to do his work, then Groves First Baptist has certainly benefited from it.
“We have an excellent man. He is just a wonderful pastor, wonderful preacher and he is just very dear to me,” she said.
E-mail: sherry.koonce@panews.com
Twitter: skooncePANews