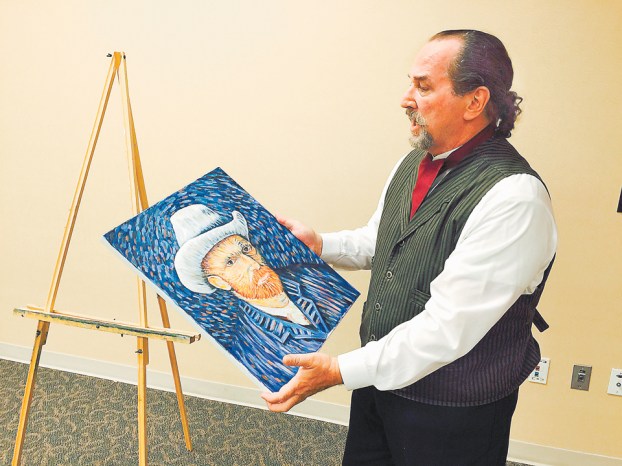 Lamar State College-Port Arthur is preparing a round of evenings devoted to fine arts, featuring work by the college’s art, music and theatre departments paired with elegant southern cuisine catered by Beau Reve.

The series — deftly dubbed “Café at Night” after an iconic painting by Vincent van Gogh — will begin each night with an art show by LSC-PA students and community artists, followed by dinner set to live music. Each night’s events culminate in a production of “Vincent,” a one-man show written by the late Leonard Nimoy about van Gogh’s journey as an artist — as told by his brother and best friend, Theo.

“Theo is really Vincent’s lifeline. He was Vincent’s brother, benefactor and best friend,” Damon Gengo, LSC-PA theatre instructor and star of “Vincent” said Thursday. “Vincent was very disturbed, and the only one he could recognize as a human being was Theo. Vincent, of course, had several illnesses that affected his mental and physical health. Theo was an art dealer in Paris, and he sent Vincent money every month just so he could survive.

“In Leonard Nimoy’s ‘Vincent,’ you go on a journey through Vincent’s art career — from when he first gets interested, the struggle he goes through, all the way to his death — but it’s all told through Theo’s perspective as he reads through hundreds of letters from his brother. When Vincent died, Theo was so stricken with grief that he actually died six months later.”

Gengo said “Vincent” has some comical moments and variety, but the play is largely a drama. “Vincent had a tragic life, after all,” he said.

“Theo was a very successful art dealer, and all he really wanted to do was to sell his brother’s paintings. But Vincent was such a peculiar guy, he only sold one during his lifetime. His work didn’t become famous until much later, after his death,” Gengo said.

Gengo said he’s wanted to perform this Nimoy’s one-man “Vincent,” culled from a larger production, since he first saw the play as a college student.

“At the time, I knew Leonard Nimoy as Mr. Spock — not the incredibly talented theater star that he was. It’s been decades since I saw ‘Vincent’ for the first time — and I’ve always had it on my mind,” Gengo said. “When Leonard Nimoy died, I thought it would be an appropriate time to make this a reality and perform the show for others to get familiar with. And to top it off, yesterday was the 125th anniversary of Vincent’s death.”

Gengo said it will be interesting to present the community with a full evening of fine arts, plus a “fabulous” dinner with dessert from Beau Reve.

“Café at Night” showings are scheduled Fridays and Saturdays, July 31-Aug. 1 and Aug. 7-8, in the LSC-PA Performing Arts Center. Tickets are $35, with reservations required.

Doors open at 6 p.m. for the art show, with pieces available for purchase. Proceeds will benefit the individual artists, as well as the LSC-PA fine arts department.

The LSC-PA Black Box Theater will open at 6:30 p.m. for a full dinner service while Section 51 Trio performs a selection of music from the ’60s, ’70s and ’80s. Pork ribeye and mixed vegetables will be served July 31 and Aug. 8. Creamy chicken caesar florentine and side salads will be served Aug. 1 and 7.

“Vincent,” starring Gengo as Theo van Gogh, will begin at 7:30 p.m. in the Black Box Theater. During intermission, patrons can enjoy some of Beau Reve’s award-winning bread pudding for dessert.

Gengo said the full eventing should conclude around 9:30 p.m. At the end of each performance, he said, guests will be able to bid an Albert Faggard painting of a van Gogh self-portrait in a silent auction.

DeCuir working toward career as attorney

To say Tieranny DeCuir is goal oriented may be an understatement. The college student is currently enrolled in 12 credit... read more