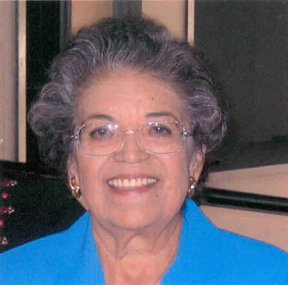 Shirley Juarez was escorted into Heaven by angels on July 23, 2015. She was born on August 25, 1933 to Josefina Alvarez Juarez and Cruz Juarez I. She was the second daughter and fifth of six children.
Shirley attended public schools in Port Arthur and graduated with the Thomas Jefferson class of 1953. Through the years, Shirley was employed at The Fair, Gordon’s Jewelers, and Great Lakes Carbon, where she retired in 1995. Following her retirement, she volunteered in the Port Arthur ISO, working with elementary bilingual students.
Shirley liked playing the numbers on games. Her favorite teams were the Dallas Cowboys and the New York Yankees. But her greatest joy was that of being one of the “Aunts” to her brothers’ eight children and all of their children who are left to cherish her memory. She leaves nephews, Juan Juarez (Christy), Cruz Juarez III (Janice), Enrique Juarez, and Matthew Juarez (Marcie); and nieces Christina Vasquez (Catarino), Celeste Flores (Jesse), and Josephine Boudreaux (Chase); eight great nephews and eight great nieces; and six great-great nephews and seven great-great nieces. She will also live in the hearts of her sister, Mary Louise Juarez, and her brother Joe Juarez (Yvonne), as well as cherished extended family and friends.
Shirley was preceded in death by her parents, brothers, Guadalupe Juarez, Juan Juarez (and wife Dora), and Cruz Juarez II (and wife Alice), and niece Yolanda Juarez Belle-Isle.
The family is especially thankful for the medical attention and loving care from all those who provided support at Dupuis Hospital in Port Arthur.
Visitation and Rosary will be at the Clayton Thompson Funeral Home on Monday, July 27, 2015 from 5:30 p.m. to 8:00 p.m. with the Rosary at 6:30 p.m.A Mass of Christian Burial will be held at 10:00 a.m., Tuesday, July 28,2015 at St. Joseph Catholic Church in Port Arthur. Burial will be at the Guedry Cemetery in Batson, Texas at 3:30 p.m.

Jeanne Schlegel Elliott went home to be with her Lord and Savior Jesus Christ on July 24, 2015 at the... read more