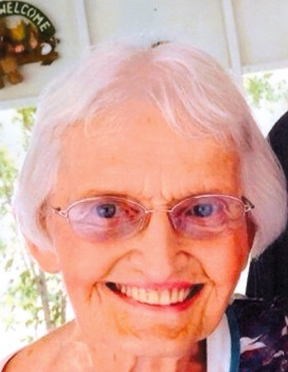 Jeanne Schlegel Elliott went home to be with her Lord and Savior Jesus Christ on July 24, 2015
at the age of 83.
She is survived by her husband of 66 years, Charles Elliott; children, Donna Mason of Groves, Nancy Burditt of Austin, Charles Elliott, Jr. and wife Mary of Nederland, and David Elliott of Little Rock, Arkansas.
Jeanne was born on November, 5, 1931 in Wagoner, Oklahoma. She married Charles in 1949 after she met him at the Cotton Carnival in Memphis, Tennessee while on her senior year band trip. That sailor never had a chance!
She and Charles raised four children in Port Arthur, Texas. Her unconditional love for her kids manifested itself in her homemade cherry turnovers, bringing our pet skunk to school for show-and-tell, making donut holes for the Jr High football team and generally making a house a home with laughter and fun.
In 1981, she and Charles moved to Kaduna, Nigeria where Charles worked for an oil company. She received a letter of commendation from Lt. Governor Wayne Mixson of Florida for her work at the Kaduna International Trade Fair which praised her natural ability in dealing with and talking to the visitors at her booth for the Florida Department of Commerce. “Her actions reflect great credit, not only upon herself but upon all Americans residing in foreign lands.”
After four years in Nigeria, Charles took a job at another refinery in Augusta, Kansas. Jeanne got busy advocating for special needs adults as their guardian/conservator through the Dept. of Social Services of Kansas. It was her job to see that the rights of these disabled people were fulfilled. And if they weren’t, the state of Kansas would hear from Mrs. Elliott and continue to hear from them until they did the right thing. She was stubborn in a good way. Then came another letter of commendation from the executive director:
“I will say that, in the hierarchy of volunteerism, you are at the top. Your gift of yourself to your wards represents the best and most beautiful of what it is to be a human”.
After Charles retired for good, they started on their grand journey of serving the Lord through mission work with the Billy Graham Crusade, Focus on the Family and Seniors in Mission (SIM).
The following appeared in the SIM newsletter and sums up the sentiments of many people:
“Here is something to encourage those working in ministries of hospitality.
Recently, Pastor Djingri Lankoande, president of the Evangelical Churches of Burkina Faso (Africa), visited SIM Canada in Toronto. Charles and Jeanne Elliott of Texas were ministering short-term at the Guest House there. Here is what Pastor Lankoande wrote in the guest book (translated from French): “Mrs. Jeanne Elliott, you really impressed me last night by your very warm welcome. I felt like I was in the arms of a mother.”
In 1995, Charles and Jeanne became members of First Baptist Church of Groves. Jeanne worked tirelessly on the Mission Committee. She began the Baby Bottle
Ministry and was involved in the Shoebox Ministry. She and Charles hosted visiting missionaries in their home where they were treated to Jeanne’s famous oatmeal cookies.
She volunteered as a librarian at the Stiles Unit where she lovingly and respectfully worked alongside inmates. We liked to say that mom is going to prison on Thursday.
It was at this place that she had the best opportunity of all to demonstrate God’s grace.
Other survivors include grandchildren: Nichole (Tim) Hagler of Orange, Cheri (Matt) Brannan of Katy, Kayla (Jason) Gregory of Pt. Neches, Jennifer Coy of Austin, Krisi (Brian) Girolamo of Pt. Neches, Christopher (Heather) Coy of Austin, Hannah, Sarah, Jonathan, Rebecca and Jonathan Elliott of North Little Rock and great-grandchildren Jason and Justin Heckman, Josie and Jordan West, Tyler, Trevor and Jaret Gregory, Kylun and Maddie Girolamo, Joshua and Dylan Coy.
She was predeceased by her parents Mace and Florence Schlegel, sisters Peggy Autry and Maycene Hicks and granddaughter Ashley Mason.
In lieu of flowers, donations may be made to the Mission Committee at First Baptist Church of Groves or Community Care and Prayer Outreach.
Visitation will be at Levingston Funeral Home Monday July 27, 2015 at 9:30 a.m. The funeral follows at 10:30 a.m. with Pastor Joe Worley officiating. Burial will be at Memory Gardens in Nederland.