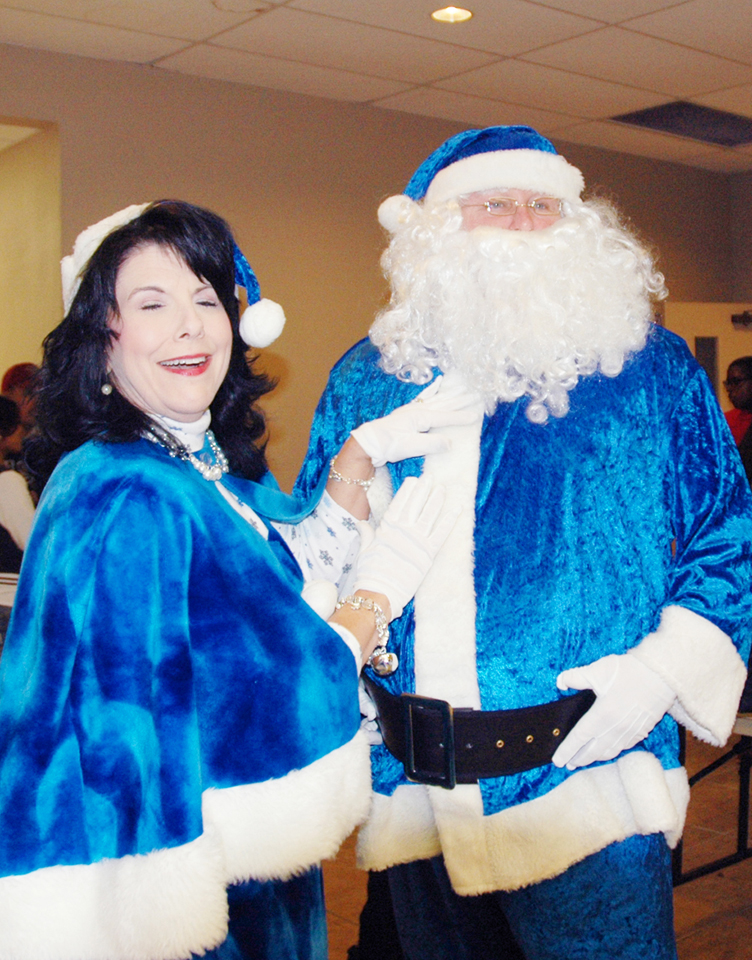 Kelly McConnell adjusts her husband, Mark Hanlon's Blue Santa suit before he heads to a tray of chocolate chip cookies in the Robert A. "Bob" Bowers Civic Center during the Port Arthur Police Department's Blue Santa program last year. Hanlon and McConnell have been playing Mr. and Mrs. Claus for the Blue Santa program for 10 years between the two.

Mr. and Mrs. Blue Santa are trading the Southeast Texas humidity for the dry sea breezes in California.

Dr. Kelly McConnell — a Port Arthur businesswoman who opened Trinity Hearing and Balance in 2008 and Mr. Claus’ better half with the Port Arthur Police Department Blue Santa program — has left her audiology practice on Anchor Drive to take a new position with the Veterans Administration in Palo Alto, Calf.

McConnell said she and Blue Santa, also known as Mark Hanlon and McConnell’s husband, will hit the road this weekend to find a new home on the west coast.

“I’ve been doing private practice for about 10 years, and I’m at a point in my life where I’m ready to try something new,” McConnell said. “Our kids have all gone off, and I’ve got an empty nest.”

“Not quite,” Hanlon interjected, laughing and holding their youngest and furriest “kids” Maybelline, 7, and Spartacus, 3 — a pair of half-sibling yorkshire terriers. “They’ll be on the road with us, so that should be fun. We won’t have to worry about alarms, at least. They’ll let us know if something’s up.” 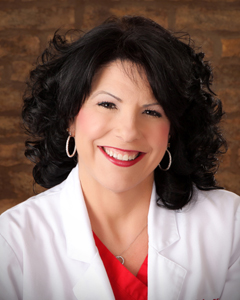 McConnell, a 47-year-old Anahuac native, said she’s been seeing to the hearing needs of patients in Southeast Texas for the last 20 years. She moved to Port Arthur 10 years ago and opened Trinity Hearing and Balance soon after. Hanlon joined the Trinity team as the practice’s office manager five years ago, after he and McConnell married.

“We sent a letter out to all of our patients about a month before my last day, letting them know the office would not shut down — just change hands,” McConnell said. “I’ve been honored so many people have trusted myself and the Trinity Hearing and Balance Center with their hearing healthcare for the last seven years, and I only thought it right the office should stay open without me.”

McConnell said what was the Trinity Hearing and Balance Center, located at 7980 Anchor Drive Suite 300-B in Port Arthur, will now be known as Trinity Audiology Specialists. New owners Drs. Rae Lynn Guerrero and Stacy Kuykendall will provide the same “outstanding services,” McConnell said, and all existing service contracts will be honored by the new leadership.

“It was important to me for our patients to keep all their services and not have to start over with finding a new doctor. Now that the business has officially changed hands, we can finish packing and hit the road,” McConnell said.

McConnell said she felt “called” to join the Veterans Administration. Starting Aug. 10, McConnell will be a staff audiologist with the VA in Palo Alto, tending to “a new generation of veterans as they return home from war.” Hanlon, an Air Force veteran, will work within the VA Audiology Department as a medical support assistant.

“I’ve always had a heart for veterans,” McConnell said. “I was actually born on an Air Force base in Maine, where my dad was stationed on active duty. Mark served in the Air Force for seven years — he went in when he was 18. And now my youngest daughter, Shannon, just joined the Air Force. We’ll actually be back in Texas the weekend of Aug. 6 for her graduation ceremony from basic training.

“I don’t know what it is about the Air Force in my family,” she added, laughing. “I guess it’s in my blood.” 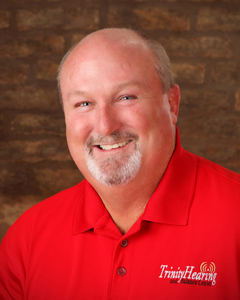 McConnell and Hanlon, 52, said they will miss their patients at the Trinity Hearing and Balance Center and their audiology service work with the Port Arthur Sertoma Club. Hanlon, a “member of the Sertoma Club for years and years,” has served on the club’s Board of Directors and as president twice, from 2010-11 and from 2014-15. McConnell joined the Sertoma Club in 2008.

Hanlon has also served on the Board of Directors for the Port Arthur Chamber of Commerce. McConnell and Hanlon are both active members of First Baptist Church in Port Neches.