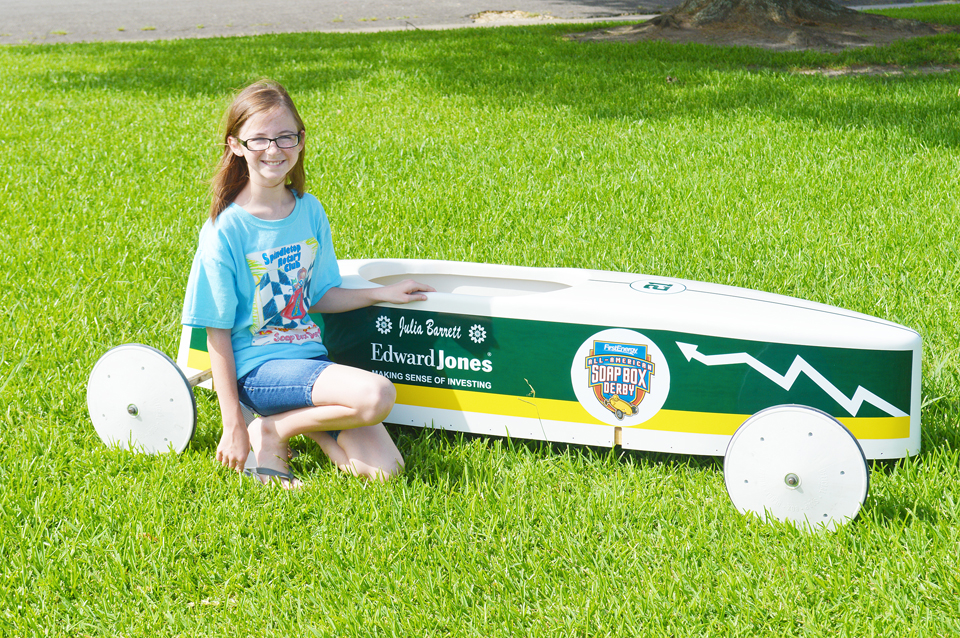 Julia Barrett, 13, of Groves will compete in the All-American Soap Box Derby, an international derby event hosted in Akron, Ohio, July 25. Barrett earned a spot in the world competition in May when she won the Southeast Texas Soap Box Derby stock division race in Beaumont.

GROVES — Don’t be fooled by the petite ballerina frame and the freckles sweeping her face and cheeks.

Julia Barrett may be all shyness and smiles around Groves Middle School, but put her inside a Soap Box Derby car and the 13 year old is just as competitive as her male peers. Her size may actually be an advantage. After all, it’s easy to underestimate a competitor when she only weighs 65 pounds.

Julia said she got her love for Soap Box Derby from her older brother Braden. The first year he flew by her downhill, she said, she wanted in on the fun. So four years ago, she geared up and started learning how to steer her own gravity-powered vehicle down steep slopes.

“My first year was a little scary. You just wear a helmet — nothing else (to protect yourself),” Julia said Monday, with a smile quickly growing to full-out grin. “But now it’s just fun.”

Julia’s father, Jason Barrett, said he’s proud of his seventh grader. She raced against 25 other competitors, including her younger brother Caden, in the Southeast Texas Soap Box Derby on the Maury Meyers Bridge in Beaumont this spring and took home first place in the stock division — a victory that earned her a place in the world championship finals for her sport.

Julia will compete against more than 100 stock division racers in Akron, Ohio on July 25 — driving the No. 309 car in the All-American Soap Box Derby.

“I’m so excited,” Julia said, eying the aerodynamic frame on her favorite mode of transportation.

Jason said all of the derby cars are all gravity powered with specific weight and construction rules, which is why Julia must ride with 90 pounds of added weights to meet the criteria. If it weren’t for the specific criteria, he said, Julia would never roll downhill as fast as some of her heavier competitors.

“She’s gone pretty fast before, but racing in Akron is really going to push her,” Jason said. “Racing in Beaumont, they reach speeds of 27 miles an hour. But up in Ohio, they can get up past 30 miles an hour — because that track doesn’t have turns like the Maury Meyers Bridge.

“We bring her up to Hockley, about 45 minutes northeast of Houston, to practice on a replica track for the big one in Akron. It’s just shy of 1,000 feet, and it’s completely straight. This is going to be the biggest race she’s ever competed in. Her brother Braden placed ninth in this competition last year, and they had cars there from Germany, New Zealand, Canada and the U.S.”

Jason said he’s been trying to build more of a Soap Box Derby following in Mid-County so his children — five total, of which three have already started racing — will have more friends to talk Derby with.

“There’s only four sanctioned races in Texas, and the one in Beaumont leading up to the world race in Akron is the biggest for our state,” Jason said. “We’d love to see more people representing Mid-County out there.”

Julia said one of the perks of racing in Beaumont is the prize money, provided by the Spindletop Rotary Club. The top three winners in each division are awarded scholarships. Jason said so far, Julia and Braden, 15, have taken home the first place $2,000 scholarship. This year Caden Barrett, 10, placed third in the same division as Julia and received a $1,000 scholarship.

For more information about racing in Beaumont, visit www.setxsoapboxderby.com.

To root for Julia in Akron on July 25, watch the livestream event on www.soapboxderby.org.