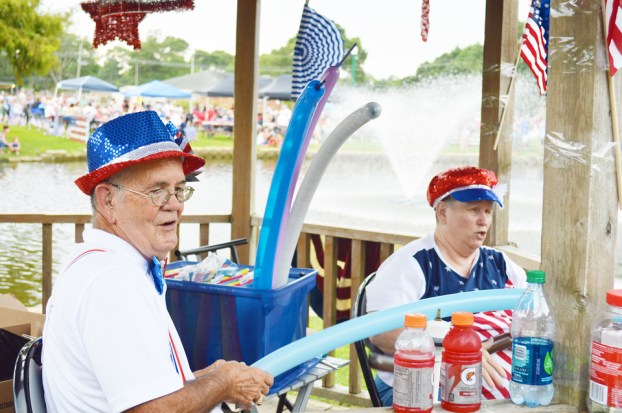 Veterans take place of honor at Nederland Fourth of July

NEDERLAND — Naisihia Williams ran interference, catching and scooping up her 2 year old as he made a break for the ducks waddling around the pond at Doornbos Heritage Park Saturday evening.

When the Port Arthur native put her son back on the ground, facing away from the pond, he would giggle and run back to his sister and resume their oversized game of Connect 4.
Naisihia said her children Deezy Givens, 2, and D’niya Givens, 4, will grow up remembering the fun they’ve had at Doornbos Heritage Park every Fourth of July. 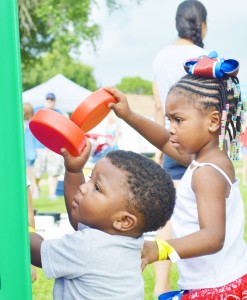 “We’ve been coming here for three years, and my kids always have a great time. Listen to him laughing away,” Naisihia said, laughing herself, as she caught Deezy again and turned him away from the pond. “It’s a good place to come out and bring your family for some good, safe fun. Everyone here is so welcoming, and they’ve got policemen and firemen at every station, which puts me at ease.

“I actually had an incident with D’niya last year when we were at the playground across the pond. There was an ice cream truck in the middle of everything and I couldn’t see her. I went and told an officer and they found her, seriously, in about five seconds. If that’s not peace of mind, I don’t know what is.”

Naisihia and her kids weren’t the only family that travels to enjoy the City of Nederland’s annual Fireworks Extravaganza Fourth of July celebration Saturday. 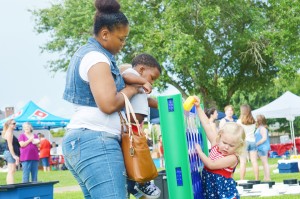 Michelle Terry, of Dallas, said she started bringing her family to celebrate Fourth of July in Nederland last year. She brought her children, 5-year-old Liam and 2-year-old Anna, to the park Saturday to spend time with their grandma, Nederland resident Donna Barrow.

“We had so much fun last year with my mom we decided to come again this weekend. It’s a new tradition for us,” Michelle said. “We’ve even got a wagon entry for the Bike and Wagon Parade later. Wish us luck.”

“This man was born in Port Arthur, grew up in Groves, graduated from Port Neches and lives in Nederland. If that’s not Mid-County, I don’t know what is,” Nugent said. “He’s chairman of the Golden Triangle Veterans Memorial Park. He has a Bronze Star medal of honor and a Purple Heart for his duty while in service.” 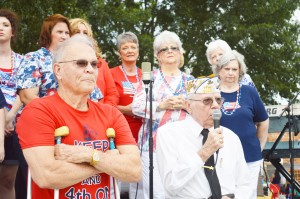 White joked he wanted to introduced simply as “Jim White,” but since no one wanted to go with that, he’d share a veteran’s take on the meaning behind the Fourth of July celebrations.

“The 56 people that signed that Declaration of Independence, we owe a debt of gratitude to them. They gave birth to our nation on July 4, 1776. They signed and pledged their lives, their fortune, their honor to creating this country. They were men of means — well educated — but they signed the Declaration of Independence knowing full well the penalty would be death if they were captured by the British.”

Nederland Parks and Recreation Director Angela Fanette said she was honored Maj. White, celebrating his 90th birthday, could join the celebration for his birthday along with all the other “national heroes” camping out in the special Veterans VIP section. 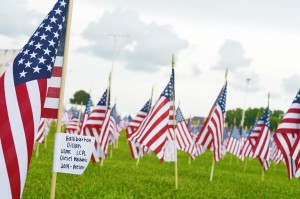 The third annual Field of Honor boasts 1,000 flags tagged for both active military personnel and veterans during the fourth annual Fireworks Extravaganza Fourth of July celebration at Doornbos Heritage Park in Nederland Saturday.

Fanette said above all, she felt privileged to share White’s experiences with the great people of Southeast Texas. The Nederland Parks and Recreation Department surprised White, celebrating his 90th birthday Saturday, with a performance by the Sweet Adelines, a birthday cake and a free family portrait session with Lori Lens Photography, set up in the park grounds for this year’s Fourth of July celebration.

“I was a junior in high school when the Japanese bombed Pearl Harbor,” White said. “There were 50 boys in my high school graduating class — 47 of us joined the military. I went on active duty the day after my 18th birthday. And over the years I’ve been proud to say that I was born on the Fourth of July.”