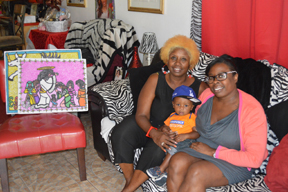 Lilly Belton and her daughter Ranyel Pendleton at first glance don’t seem much alike.
Belton, whose middle name Flugence is French for “pleasant,” is outgoing — even flamboyant — while her daughter’s personality can be described more as reserved.
Yet, the two Port Arthur residents have a bond that goes beyond mother and daughter.
Fact is, Pendleton has another name for her mother.
“I call her my momanger,” she said.
Pendleton, 34, is a writing teacher at DeQueen Elementary School. But, her writing does not stop outside the classroom. Since she was a little girl attending Catholic services, she’s written poetry, and now she’s penned three religious-themed books.
Her first, “Send Her Back to Mommy,” is about a little girl’s reaction to a new baby sister.
Her second book, “Poems to Soothe the Soul,” is filled with her own poetry. The third book, “The Jewels of His Crown,” is a Bible Study designed for women full of encouragement and empowerment.
Pendleton said she can count on her mother to help market those books, to make sure her daughter goes to events like the recent Juneteenth Celebration, or other festivals, where her books get the attention they deserve.
“We’ve always been close, probably too close. I know she always has my best interest at heart,” Pendleton said of her 60-year-old mother.
Inside her Seventh Street home walls painted a vibrant red, a zebra print cover on the sofa, and a mix of black folk art and family photos all describe the perhaps frenetic energy that Belton is known for.
Belton is mother to two daughters, Pendleton, and LaKisha Mathes, 41; and is grandmother to six grandchildren.
“None of my girls are like me,” she said.
Often, when she is setting up a booth for Pendleton to display her books, her own Black Folk Art will share space, mainly so others can get a look at what has become a passion.
She started collecting the unique art when in 1993, and has gone as far as California to find her prized possession, a black Madonna and Child.
Growing up in Louisiana, Belton said all she ever heard was that Jesus was white. When she got older, she realized Jesus’ complexion likely was a darker hue, prompting her to begin a search for the dark-skinned Madonna and Child.
“I had a hard time finding it, and finally went to California to an art gallery where they found it for me,” she said.
Her walls are also home to other favorites: “The Funeral Procession” painted by Ellis Wilson, is an original with a colorful modern-day history.
“This picture is on The Cosby Show, hanging in the Huxtable’s home. Ellis Wilson was Claire Huxtable’s uncle on the show,” Belton said.
Not all of her art collection is well known.
More recently, she’s taken a shine to original folk art painted by 67-year-old Eva Anderson, of Port Arthur.
Anderson, who lives in Port Arthur’s O.W. Collins public housing development cannot afford canvas, or have her paintings mounted. Instead, she handpaints sheets and tacks her creations on cardboard.
Perhaps another favorite hanging inside her living room is a pencil drawing of herself, painted by James Pendleton III, her now son-in-law.
Pendleton drew his future mother-in-law sight unseen, only going by what his soon-to-be wife told him about her mother.
“I told him, she wears her hear in an afro, calls herself The Black Goddess, that’s what he created,” Pendleton said of drawing that not only looks like her mother, but also captures her spirit.
While Pendleton said she and her sister know they are both far more reserved than there mother, they do share some common traits, but with less swagger.
“We all follow her stilettos, just in a different size,” Pendleton said.
E-mail: sherry.koonce@panews.com
Twitter: skooncePANews

Port Arthur police are looking for a man who robbed the Citgo Convenience Store at 1200 Gulfway Drive in Port... read more