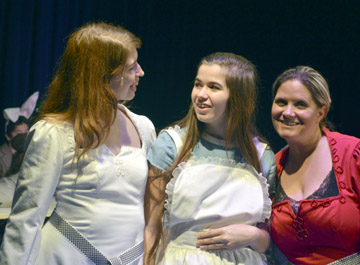 PALT to present ‘Alice in Wonderland’

There’s nothing more powerful than a little girl with a book.

Take Alice, a well-read 7 1/2, who can immerse herself so deeply in bound pages she takes gibberish and creates an entirely new universe with a back story all its own.

Disney introduced her as a lighthearted know-it-all just trying to find her way home. Director Tim Burton re-imagined Alice as a young woman with a great destiny — one that enabled her to think six impossible things before breakfast in order to defeat the feared Jabberwock.

But Zech Turk believes Disney and Tim Burton failed to capture Alice just right. After all, she’s only 7 1/2. She is neither trying to get home nor slaying monsters. She is simply existing in a dream world of her own design, stumbling from scene to scene not quite able to make sense of the creatures she finds.

The Port Arthur Little Theatre will present “Alice in Wonderland” — which begins its three-weekend run Friday — in a simultaneously traditional and untraditional light, taking scenes from Lewis Carroll’s original books “Alice’s Adventures in Wonderland” and “Through the Looking-Glass, And What Alice Found There” to showcase Alice in all her unaltered, imaginative glory.

Resa said the PALT production offers a different perspective of Alice, one that may surprise people who aren’t familiar with the books.

“This is ‘Through the Looking-Glass’ and ‘Alice’s Adventures in Wonderland.’ It’s not as dark as the Tim Burton version, and it’s not as happy or light as the Disney version,” she said. “It’s kind of a happy medium between the two.”

“Zech really wanted our version to show Alice’s world as Lewis Carroll intended it,” Sarah Chapman, who plays the Cheshire Cat, added. “All the dialogue, the entire script, comes completely from the books. Most of the scenes are from ‘Through the Looking-Glass,’ not from ‘Alice in Wonderland.’ The book version is much more out there and there’s not really a plot.

“I think the little kids will probably have more of an open mind coming in because they won’t be as familiar with the movies. The goal is for them to walk away like, ‘Whoa, she’s in Wonderland.’ Because that’s the entire plot — if there is one. Alice is in Wonderland, in this dream land she’s created. And it’s magical.”

Resa said the script lends itself to a more fantastical setting because each of the scenes could stand alone and still make sense — which is why there isn’t a cohesive plot line to connect each one.

Sarah said the actors have developed a new appreciation for Lewis Carroll from other members of the cast and crew.

“We have people here who have done research papers on each of the books and about Lewis Carroll overall, so we’re getting all these insights we couldn’t have gotten from any of the ‘Alice in Wonderland’ movies,” she said. “I know Zech decided to keep a brunette Alice because Lewis Carroll based the character on a girl in real life, and she was a brunette.”

“Zech has a big, deep love of ‘Alice in Wonderland,’” Debbie Pletcher, the show’s assistant director and Queen of Hearts, added. “He went to his senior prom in 2010 as the Mad Hatter. It was important to him to stay true to the books, why is why he picked this script. Everything comes directly from the books and it’s the most successful Broadway version of ‘Alice in Wonderland’ ever staged.”

Debbie said the production has everyone’s favorite characters from both books, which gives the Port Arthur Little Theatre an opportunity to do something unique for the audience.

“On the last Saturday performance, we’re going to host a Mad Hatter’s Tea Party,” Debbie said. “People can come have tea, juice and cookies with the Mad Hatter, the March Hare, Alice, the Cheshire Cat — all of their favorite characters — and take pictures at the Mad Hatter’s tea table we’re using on set.”

Showtimes are 7:30 p.m. Fridays and Saturdays, and 2:30 p.m. on Sundays. Debbie said the shows will last two and a half hours with a 15-minute intermission between acts.

Tickets are $11 for adults, $9 for seniors, teachers and military, and $6 for students. Groups of 10 can call the PALT reservation line for a group discount.

‘Bog’ at Popeye Holmes Park now living up to…