Sounds Good: On the fringe at Mollie’s 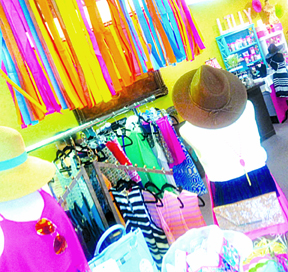 I got a sneak peek at Mollie’s Boutique’s summer fashions at a time they’re typically closed. Models had arrived to show off summer looks for their Facebook and other social media outlets.
Elizabeth McLain says the trend is fringe on everything, tassels, Santa Fe prints and crop tops.
Lone Star lovers, you’re in luck. There’s a Texas trend featuring red, white and blue flags and patriotic stars and stripes.
Go see at 3316 Highway 365. That’s by the UPS Store in Nederland.
Snow days
Most of us Southeast Texans can hardly imagine that it’s June and snow is still packed on American soil, say, in Colorado. We just don’t know what to do with that.
My friend just showed me photos of Peak to Peak Highway that she traveled and people were excited a segment of road had just been cleared. People were driving on it for the first time in months and taking photos of snow piles that towered over their heads.
I imagine people who live like that would melt down here.
Dessert bar
I attended a lovely wedding with a dessert bar reception.
The most lemony of lemon squares, squares of gooey chocolate and blueberry crumble were sweet bites and some salty Texas Trash complimented those flavors.
The towering main cake had hazelnut filling and the groom’s table featured an array of cheesecakes.
I’m just telling you about the food, because it was a showcase of beautiful edibles. The rest of the wedding was just right, too. Hope every couple gets a sendoff with as much love as these two got.
darraghcastillo@icloud.com