THE MOVIE GUY: Pixar back with another great film, and it’s packs in a lot for parents 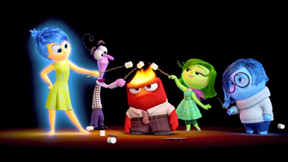 Pixar Animation has been the standard bearer for quality animation for almost 20 years now, and even though they have been in a mild creative slump lately, they have returned to top form with the release of one of their best, and most atypical movies yet.
“Inside Out” literally takes us inside the mind of a preteen girl named Riley. While poking around inside her brain, we meet the five emotions that make up Riley’s mindset and control the way she sees and reacts to the world around her.
Joy (Amy Poehler) is the dominant emotion, giving Riley a sunny disposition. Fear (Bill Hader) works to keep her safe from harm, while Disgust (Mindy Kaling) is there to remind everyone about things that just don’t seem right – such as broccoli.
Anger (Lewis Black) occasionally gets the girl fired up, which is helpful when playing hockey. Finally, Sadness (Phyllis Smith) just mopes around and turns some memories blue, which is why Joy works so hard to keep Sadness under control.
That’s difficult to do when Riley’s family moves to San Francisco and the girl who was once so joyful finds herself in a strange city, unable to make new friends and missing the things that she loved to do back in Minnesota. It becomes a complete crisis when Joy and Sadness go missing, leaving Anger, Fear and Disgust running things in Riley’s head.
I’m sure that there are many psychiatrists shaking their head at this concept, but I loved the way that Pixar uses these five primary emotions to explore how a young girl’s mind works, and to show how easily teenage emotions can get off balance. I particularly loved that the filmmakers gave each of the emotions a vital role to play in Riley’s mental health. Even Sadness is given her proper respect, although Joy can’t really understand that emotion’s purpose.
It makes for a film that is almost an abstract cinema piece, but one that still has plenty of brightly colored images and funny characters to keep the kids entertained. Pixar is known for making films that work on multiple levels, and parents should get a kick out of an onslaught of cerebral jokes, especially if mom and dad ever took a psychology course in college.
“Inside Out” doesn’t quite rise to the level of my favorite Pixar films, and it may be a bit harder to get the youngest kids to get on board a surreal adventure, no matter how brightly painted. Still, this is one of Pixar’s best adult level films and a welcome return to quality.

Being a PA News Intern