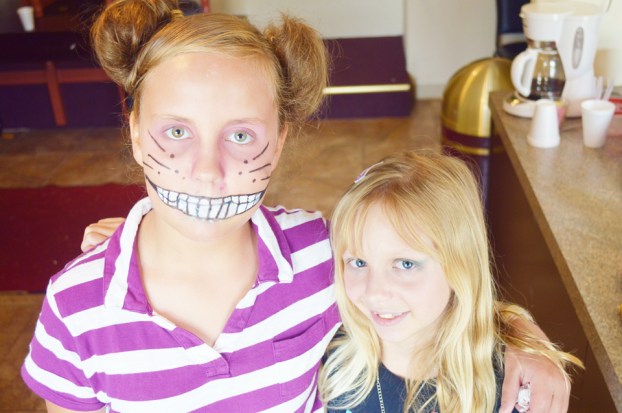 The kids have taken over the Port Arthur Little Theatre.

Emily Baker, 10, ran around the stage, letting out a small shriek each time she bumped into Anna Gerstenberg, 13, whose face was painted with a toothy smile that reached ear to ear for an upcoming “creepy” performance.

Backstage Brianna Parent, 9, sat patiently as her hair went into tight curls while her sister Cheyanne, 5, practiced her budding skills in stage makeup on her 15-year-old theatre director Resa Pletcher, the PALT Junior Board of Directors historian.

The 37 children enrolled in CELT Kids this summer have spent the last week and a half developing skills in acting, hair and makeup, lighting and sound, prop making and set construction to put on their own production of “Alice in Wonderland” this weekend. Two casts, with ages ranging from 5 to 13, will perform one show each Saturday on the Port Arthur Little Theatre stage. 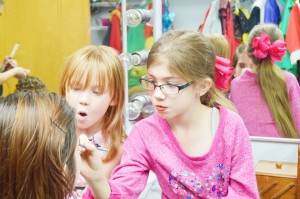 Resa, who is directing the evening show with her assistant director Ross Lefort, said the children’s performance will resemble the animated movie — with everyone’s favorite characters and scenes included.

“We’ve got the Mad Hatter, the Cheshire Cat, the March Hare, the Queen of Hearts, the White Rabbit. We’ve got Alice growing and shrinking as she eats the different cakes and the Queen yelling, ‘Off with her head!’ The only ‘staples’ we don’t have are Tweedle Dee and Tweedle Dum,” Julia Evers, 18, said. Julia, the PALT Junior Board of Directors president, will direct the afternoon show with her assistant director Josh Carrizao.

Resa said their budding thespians have taken to the adventures through Alice’s imagination and are “amazing” for doing what no director would trust adults to do — put on a show in just two weeks.

Brianna, who plays Alice in the night show, said she loves playing such a “curious” person.

“Alice believes in myths because the book is just a story — but she believes it’s all really happening to her,” Brianna said. “She’s always looking into stuff and getting nosy, and she gets aggravated with people who don’t make sense. Because she makes sense.”

Emily, who plays Alice in the day show, said she she enjoys her role because “Alice acts like me,” but her favorite characters are the Cheshire Cat and the Mad Hatter.

“The Cheshire Cat freaks me out a little because she’s creepy,” Emily said, laughing.

Anna pointed at the toothy grin painted across the lower half of her face and laughed, her own braces blending into the face paint.

“I’m supposed to be really creepy and sneak up behind Alice to scare her,” Anna said. “I’m not really sure why. I guess because, ‘We’re all mad here,’ right?” 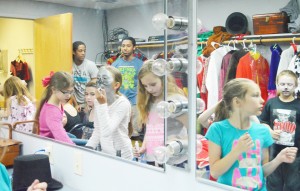 Julia said the annual summer camp is a great way to help the children with memorization and social skills, but the performance serves as a valuable lesson to adults.

“When these kids get up there and do a show they’ve only had two weeks to prepare, it shows the adults how valuable the arts are in a community — especially for the children, because it helps them be creative and have confidence in their own unique self.”

Ask a cop: What to do if confronted by police officer

Golden from Houston asks: Thank you for contributing to the Port Arthur News and answering questions from citizens about the... read more