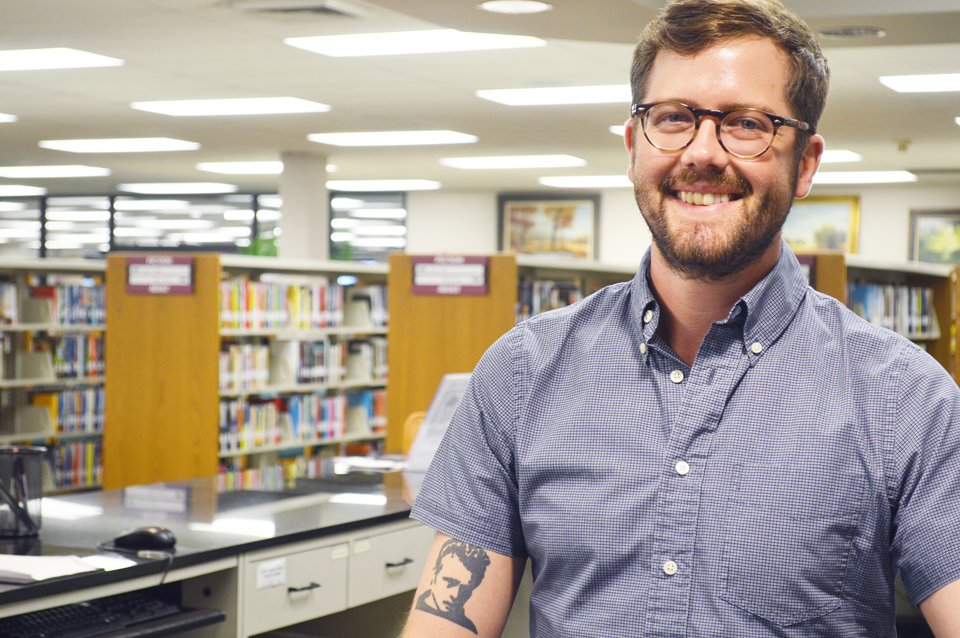 Skyler Williams, 32, of Groves is moving from his "home base" for the last 16 years, the Effie & Wilton Hebert Public Library in Port Neches, Thursday to join his partner, Ray Palko, in San Francisco, Calif. Williams, who graduated from Lamar University in May, said he and Palko will marry at San Francisco City Hall on June 30.

PORT NECHES — Skyler Williams has been the “smiling face” of the Effie & Wilton Hebert Public Library for more than a decade.

The 32-year-old Groves native has been a staple in the Port Neches’ library Mother Goose and Summer Reading programs since he was a child himself. Before he became circulation manager — which Williams admits is a “made up title” to make his actual title, library assistant, sound fancier — Williams was just a 16-year-old Port Neches-Groves high school student working a summer internship sponsored by Motiva.

“I’ve spent half of my life here,” Williams said, laughing, at his desk Monday night. “I worked my internship then came in part-time until September 2001. Since then, I’ve been here every Sunday through Thursday from 11 a.m. to 8 p.m. It’s safe to say I don’t know what’s going on in popular culture anymore.”

Williams may not know anything about “How I Met Your Mother” or “Scandal,” but he knows his way around bound literature. And he says the library card has served him well. He graduated three weeks ago from Lamar University with a major in English and a minor in writing.

“My goal in life is to be the next David Sedaris. There he is twice over there,” Williams said, pointing at the library’s Readbox — a display to the tune of the Redbox movie menu with Williams’ suggested reading for the week. “But if I want to be serious about my writing, I’ve got to live somewhere with one of the big publishing houses. I need to be where the writers are.” 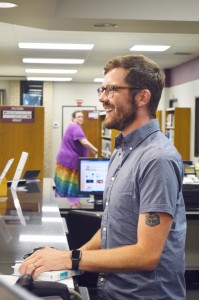 Skyler Williams, 32, of Groves checks in a patron’s books Monday at the Effie & Wilton Hebert Public Library in Port Neches. Williams, a spring 2015 Lamar University graduate who has called the library’s front desk “home base” for the last 16 years, is leaving Thursday to join his partner, Ray Palko, in San Francisco, Calif. Williams said he and Palko will marry at San Francisco City Hall on June 30.

To follow his dream, and his love, Williams is moving away from “home base” — also known as the library’s front desk — and into a small studio apartment in downtown San Francisco, Calif.

“My partner (Ray Palko, 34, from New Jersey) moved there for an internship three years ago, after he graduated with his master’s from Lamar,” Williams said. “I’ve visited at least a dozen times and it already feels like home. I can’t wait for it to actually be home.”

Williams said the biggest draw to the west coast is the “liberal mindset” and marriage equality. He and Palko plan to marry at San Francisco City Hall on June 30.

“It’s funny, because — all of my coworkers will tell you — I’ve threatened to leave a dozen times, and it’s always been to Austin,” Williams said. “But I’ve fallen in love with the west coast. Ray and I figure either San Francisco, Portland or Seattle will be our forever home. We’re just waiting for one of them to adopt us.”

Williams said his hope is to spend a year “just to live a little bit” before pursuing a master’s degree in creative writing.

“Short story is really where my heart is,” he said. “It’s one of the dying mediums, but it holds so much power — same with poetry. Every word carries weight because you don’t have room to be bloated with little nothings.

“I want to apply for the Stegner Fellowship (at Stanford). It’s very selective, only five chosen for poetry and five for fiction. It’s a two-year internship where you get paid to write and work with authors. It’s kind of a pipe dream — 1,700 people applied last year and only 10 got chosen — but I have to try.”

Williams said the last 16 years at the library have seriously curbed his family time and social plans, but spending 40 hours a week in a library isn’t a bad way to live.

“I believe in the public library — and I know it sounds hokey and stupid — but libraries are, and should be, a center for involvement in the community,” he said. “I’ve seen families grow and transition. Kids I used to sing songs to during Mother Goose in 2002 are now going to college and getting married. Or you see the older couples who always come in together but now only one comes in — one of them has passed away.” 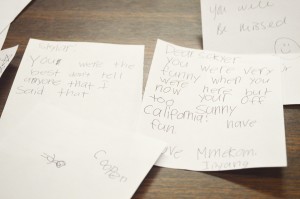 Patrons of the Effie & Wilton Hebert Public Library in Port Neches have been writing farewell notes to Library Assistant Skyler Williams, 32, of Groves to celebrate his final week as “the face” of the library, a post he’s worked for the last 16 years. Williams, who graduated from Lamar University in May, is moving to join his partner, Ray Palko, in San Francisco, Calif. Williams said he and Palko will marry at San Francisco City Hall on June 30.

Williams said his goal for the last 16 years has been to make everyone who walks into the library feel welcome, and with the news of his next adventure making the rounds through Port Neches, he’s finding out just how much of an impact he’s made in the community.

“One woman cried when she found out I was leaving,” he said. “When she first walked in two years ago, she had never been to a library before. She was worried we would make her feel unwelcome or stupid for not knowing how it works or where things are.

“But she pulled me aside the other day and said it was my smiling face that kept bringing her back. She’s been in here every other day for the last two years. Stories like hers and from the people leaving sweet notes, or kids leaving me drawings to bring with me to California — it’s all very touching. It makes me feel like the last 16 years serving the public — and OK, paying my bills — has had an impact.”

Williams will work his last shift at the Effie & Wilton Hebert Public Library, located at 2025 Merriman in Port Neches, Thursday.

For more about Williams, rent from the library’s Readbox or read his favorite book, “Running With Scissors” by Augusten Burroughs.