Hats off to West’s dedication towards Charles Roast 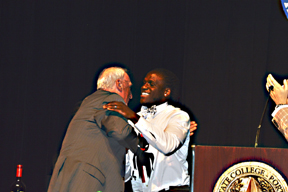 By Gabriel Pruett
The News Sports Writer
One has to tip his cap to Bob West and his hardwork putting together a great night at The News Homecoming Roast of Jamaal Charles. West announced his retirement to The News staff back on April 8 and it is no lie the man has only not been in office maybe three times since that date. Hours upon hours West has spent on the phone to put together what was a great night for everyone in attendance, including myself. It would be a tragedy if I did not say once again the readers of The News and sports fans across Southeast Texas will miss West and his work. He plans to continue his work for the Tuesday golf page and now his face might be seen less around the office…It appears a decision is close to being announced as to where former Nederland hoops star Colton Weisbrod will play next year. Sources close to the transfer from the University of New Orleans reported late in the week Weisbrod is likely headed to Lamar State College-Port Arthur to play under coach Lance Madison. This keeps Weisbrod on the court while his Division I one year of ineligibility goes through due to his transfer. After playing a year for the Seahawks, Weisbrod then can join Tic Price at Lamar University and become a Cardinals player for two years. None of this would have been an issue had former LU coach Pat Knight had done the right thing and recruited the former Class 4A Player of the Year…Sad news came out Wednesday when former Port Arthur Memorial graduate J’Covan Brown was named in allegations of academic misconduct at the University of Texas. A former academic mentor has reported he helped write papers for Brown who shined on the basketball court while at Memorial. Congratulations to the Port Neches-Groves 7-on-7 team for clinching a spot in the state tournament. PN-G defeated Cole, Spring Westfield and Cy Ranch on Saturday before dropping a game to Cy Fair. The best part is seeing a guy named Jack Giblin back on the field. Giblin suffered a season-ending foot injury early last season and his return could mean even bigger numbers for quarterback Adam Morse…Dez Bryant just became the athlete I hate the most in today’s sports. The Dallas Cowboys receiver said it is no joke there is a chance he will skip the Dallas season opener if he isn’t signed to a long-term deal by July 15. That is the deadline for franchise-tagged players to negotiate and sign long-term contracts. Bryant’s other options are to shut up and play or not play at all. Dallas would pay Bryant $12.8 million next season as a franchise-tagged player. Good move by Jerry Jones keeping this jerk around and letting DeMarco Murray waltzed to Philadelphia…This column is going to be cut short now due to all the Jamaal Charles coverage plus there is a little thing named vacation knocking on my door. Please take time to visit our new, free website at www.panews.com and especially see photos.panews.com for photos by yours truly from the Charles roast. It was a night to remember. Thanks for reading and I will be back in this space in two Sundays.
Gabriel Pruett is a sports writer at The Port Arthur News. He can be reached at gabe.pruett@panews.com.