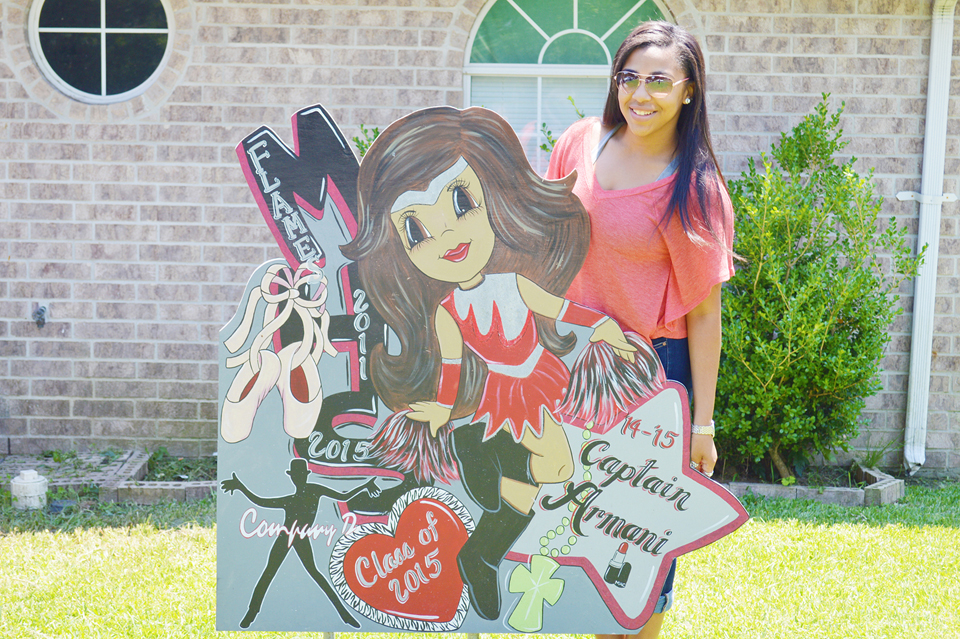 Memorial High School valedictorian Armani Alpough, 18, of Port Arthur graduated Thursday night with several scholarships, including the prestigious Gates Millenium Scholarship Ñ which will cover the full cost of tuition to pursue her education all the way through a doctorate. Alpough said she will move to Washington, D.C. this fall to attend Howard University and work toward her first degree in finance.

The Memorial High School valedictorian said when she first dreamed of opening her own dance studio in Port Arthur, her studious side kicked in — she started researching immediately, comparing other studios in the area to determine what makes them succeed and what makes them fail.

Alpough, 18, of Port Arthur said the only commonality among the local dance studios is their ‘going out of business’ signs.

“Most of them go out of business due to financial problems,” Alpough said Wednesday, a day before she graduated with a 4.0 GPA. “If I go to school for finance — learn how to manage the money and how to actually run a business — I’ll have a real shot at being successful here. Because I’ve got the dance part down.”

Alpough said she’s been dancing at Company D Dance Academy in Nederland since she was 3. She’s experienced in lyrical, jazz, ballet and hip hop, and recently became a member of the Company D competition team. She lead the Memorial High School Marching Flames as captain her senior year and as a junior leader before that.

“I want to own my own business here, probably over on the (west side),” Alpough said, “and dance is where my heart is. I know if I’m going to have a career, I want it to be something I’m passionate about.”

Alpough said she’ll learn the ins and outs of the finance world from one of the top designated Historically Black Colleges and Universities in the country — Howard University, currently ranked as the No. 2 HBCU by the U.S. News & World Report, in Washington, D.C. — as a prestigious Gates Millennium Scholar.

Alpough said winning a Gates Millennium Scholarship put her in a unique position. The scholarship fund will provide Alpough with a “full ride” to any institution of her choice all the way through doctoral studies.

“Howard has always been my top pick, but I’d always thought I would go to Texas State University instead. Howard is a very expensive, private school. I didn’t want to burden my family with that,” Alpough said. “But then I got the Gates scholarship, and I knew for sure I was switching to Howard.

“I’d already been accepted and now I’d have the money to pay for it. To go to school for free is a blessing. I won’t have to worry about how my schooling is impacting my family at home, financially, and I was able to pick the school I wanted above all the other ones — not just settle for what we could afford.”

Alpough said she’s already considering options for her master’s and doctoral degrees, but is most excited to make the move to Washington, D.C.

“I’m looking forward to meeting people and being somewhere other than Texas,” she said. “I always knew I didn’t want to stay home for college. I want to venture out and do my own thing, learn what other parts of the country are like. Because I’ve been all over Texas — I’m ready to go out of state and see how other people think.”

Alpough graduated Thursday night as a member of the Memorial High School yearbook staff, the National Honor Society, Word of Mouf — a student group that raises awareness about tobacco use and cancer — the Youth Advisory Council for the City of Port Arthur, and The Ivy League.