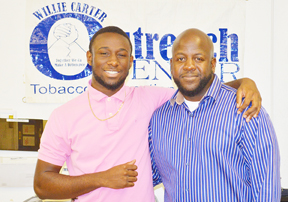 The three would reach out in the community and within their churches to provide guidance and relay their life experiences to boys who may not have many strong male figures in their lives. Now, their mentor program has grown to include up to 20 volunteers at a time under Project Life Changers, which formally founded a year ago at the request of Justice of the Peace Tom Gillam III, serving Jefferson County Precinct 8.

“When Judge Gillam asked if he could start sending young men from the court system to the program, we knew it was time for something a little more formal,” Anderson said Tuesday. “We approached other churches, civic and service organizations, and people known for being involved in the community to see if they’d be interested in mentoring our young men with us.”

“Almost immediately after we started getting the court ordered kids, we approached (Port Arthur Independent Superintendent) Mark Porterie about doing a preventative program in the schools, during class times,” Anderson said. “We don’t want these boys to act up and wind up seeing us because they have to.

“So we go into the elementary, middle and high schools once a week — dealing with the basics on how to become a productive citizen and becoming a role model for someone else. We talk about things as simple as making up your bed when you first wake up. Because if you can keep your bed clean, you can keep your home clean.”

Memorial High School Principal Glenn Mitchell said Project Life Changers tackles many of the more difficult social challenges within his school, catering to students who have “had some difficulties” but are willing to improve.

“We’ve seen a remarkable turnaround in our young men,” Mitchell said. “Some of them have a lunch outside of the regular cafeteria setting once a week, and it puts a positive spin on the fact that they’re different.”

Anderson said even though Project Life Changers has almost taken on a life of its own, it’s still the one-on-one relationships that drive many of the mentors.

“The personal time is the most important,” he said. “We want these young men to learn from our mistakes. We want to save them from certain situations we know, as adults, how to avoid. I still have a mentee — he’s 23 or 24 now — and he’ll call me once or twice a month with news, something he wants direction on, something he wants me to pat him on the back for. We’re (building) relationships that last.”

Memorial High School graduating senior Morgan Ford, 18, said he’s spent the last seven years building his relationship with Anderson. They met when Ford was 11 years old — two years after his father died. Anderson helped fill a void in his life, he said, respectfully offering advice and lessons his father could no longer teach.

Ford said the guidance has evolved as he’s grown older. Now that he’s about to move out of state as a defensive back at Arkansas Baptist College, Ford said he and Anderson spend a majority of their time together talking about college — what to do and what to look out for — and swapping sports stories.

“He’s helping me be a better man,” Ford said Tuesday. “A man can groom a kid in many ways. He’s taught me a lot. I feel like (working with Anderson) has been a success.

“I feel like if a kid my age at 11 will get inspired by another man reaching out, other kids will too — especially if you don’t have a father figure in your life. I feel like it’s been a success. I’ll be seven hours away (at Arkansas Baptist), but I’m keeping in touch.”

For more information about joining Project Life Changers either as a mentee or a mentor, call (409) 960-1755.