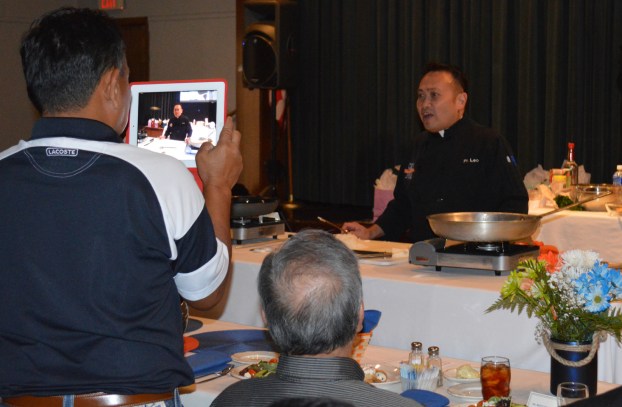 A healthy portion of faith, family and food, with a dollop of humor on the side was served to a full crowd Thursday at St. James Catholic Church.
There, celebrated chef and author Father Leo Patalinghug, a Catholic priest of the Voluntas Dei Institute, prepared Penne al la Vodka to those attending a cooking demonstration fundraiser for the church.
“Tonight’s fundraiser is the first major one in a long time. Parishioners say we have not had a fancy shindig in a while,” David Edwards, priest of St. James, said.
Edwards said the church had gone all out bringing Father Leo to Port Arthur, where he dished up as big a helping of good food as words of inspirational wisdom — all plated on a bed of faith.
“This is truly the hand of God that put all this together,” Patalinghug said while searing chicken breasts for the savory dish.
Eating a meal together is something all families should make time for, he said.
A family meal, he said, will go far to counteract drug abuse and violence by instilling a sense of belonging.
“If you get your family together it transforms the table into a desk to learn a powerful lesson from parents: “I love you so much I care to spend time with you,”Patalinghug said.
The renowned priest first started cooking publicly after 9-11, when he was in Lourdes, France on vacation with other priests.
That’s when the planes came down in the U.S. in the name of God, Patalinghug said.
“Did God want us to die? No. He came that we might have life to the fullest,” he said. “After those planes hit us it was a tough weekend.”
In the immediate aftermath of the 9-11 bombings, Patalinghug decided to utilize his culinary skills and cook a meal for himself and the other priests on vacation.
“The way we can heal is to eat in communion,” he said.
During that meal, one of priests suggested he have a cooking show — one that features a cooking priest who talks about faith and God’s love while demonstrating each recipe.
The idea took off in spite of Patalinghug’s reluctance to be in the limelight.
Since then his “Grace Before Meals “movement has gained traction around the world, centered on one fundamental concept: The simple act of creating and sharing a meal can strengthen all kinds of relationships.
Patalinghug offered, along with a delicious meal, what he has learned to be true, “God is with us as long as we are willing to give him a place at the table,” he said.
“Grace Before Meals” has grown from a simple idea to a worldwide movement, producing a popular book, Web shows, blog and a pilot for a PBS-endorsed television show.
“Grace Before Meals” has been profiled by national news shows. Patalinghug has also appeared on the Food Network hit show, “Throwdown with Bobby Flay,” in which he defeated the famous chef in a fajita cook-off.
His newest book, “Epic Food Fight: A Bite-sized History of Salvation,” delves into the “Theology of Food” and was published by Franciscan Mecia.
For more information, visit the Web site www.GraceBeforeMeals.com.
E-mail: sherry.koonce@panews.com
Twitter: skooncePANews

Summer is right around the corner; it’s time to think about keeping children eating healthy while school is out.  Port... read more