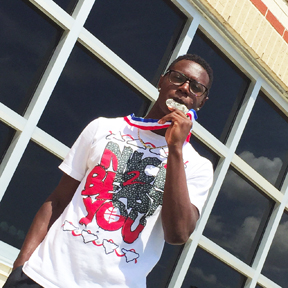 By Gabriel Pruett
The News Sports Writer
Port Arthur Memorial sophomore Kary Vincent is hungry for far more than the Krispe Kreme doughnuts he took down late Saturday night.
Vincent along with this Titans teammates placed second overall at this past weekend’s Class 6A UIL Track and Field Championships.
The sophomore ran in the 4×100-meter relay team which finshed second behind Arlington Martin after the Titans posted a 40.59, good enough for the third best time ran this year in the country.
Martin’s 40.33 is the fastest time ran this year in the nation.
For Vincent, Saturday was the first time he ran in the race since the Nederland Bulldog Relays, the second track meet of the year. He replaced junior Quantae Conners who focused his time on the 4×200-meter relay, the race in which Memorial won gold.
“I was the anchor,” Vincent said. “It never bothered me I was not running early in the year. I am a team player and whatever it takes for us to get to the highest level I am fine with it.
“Some people would say there was pressure on me but I didn’t feel it. I practiced with the team all year. I was not new to it. I was ready.”
Vincent said he had to thank the other three Titans in the race; JaCorie Jones, Kameron Martin and Corey Dauphine; for their confidence leading up to the race.
“They watched my practices and knew I give it my all,” Vincent said. “Q is one of my best friends. He had no problems with it. We talked about it and it all worked out.”
Vincent said right after Dauphine finished the line ahead of Manvel who came in third at 40.61, he looked to the board for the time.
“All I could do was thank God for all he had done for me,” Vincent added. “I didn’t get any sleep. I stayed up until we left the next day.”
The Titans in 2015 talked all year of winning the state team title.
Manvel won the meet after finishing second in the night’s final race, the 4×400-meter relay. Manvel finished with 55 points after competing in six events while Memorial grabbed second after ending with 44 points in three events.
“Second place makes me even more hungry and push my teammates next year to go get that first place,” Vincent said. “We watched Manvel in that final race and watched the heart they showed to win the title. What they did was take advantage of their opportunity. I could do nothing but congratulate them because they deserved it.”
Vincent finished by saying he still is walking on Cloud Nine and cannot stop smiling after the success the Titans had in Austin.
“I am still feeling it,” Vincent said. “Every morning I wake up and see this medal hanging from my bed post. I amappreciative of God and the opportunity he gave me and my teammates.

Prep Track: Class 6A state meet all over national…