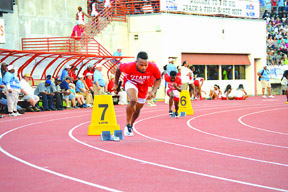 Gabriel Pruett/The News Jacorie Jones takes off to start the 4x200-metery relay. The Titans won gold in teh event.

By Gabriel Pruett
The News Sports Writer
Class 6A’s UIL Track and Field Championships this past Saturday was a very fast event.
Consider the fact Cibolo Steele’s Andrew Hudson ran a 10.50 in the 100-meter dash and placed sixth. The winner was Devin Duvernay of Garland Sachse at 10.27, the nation’s second best time this year.
Port Arthur Memorial even jumped into the national ranks in the 4×100-meter relay with a second place time of 4.059, the third fastest time in the nation this year. Martin won the event and has the country’s quickest finish at 40.33. Manvel’s 40.61 is good for fourth in the country.
No team in the nation has been able to beat Memorial’s 1:23.84 in the 4×200-meter relay, set in the area meet.
Saturday Memorial ran the country’s fourth best time at 1:24.29 and Manvel is now fifth at 1:24.50.
Kingwood and Manvel put on a show in the 4×400-meter relay and Manvel’s second place finish led to the team winning the team title.
Kingwood ran the nation’s third best time at 3:12.44 and Manvel moved to fourth at 3:12.48.
Deontay Anderson not only shocked Memorial’s Corey Dauphine with his gold medal win in the 200-meter dash, he is technically in the country’s top 10 with a 20.99 yet with the help of the wind his time has not yet become official.
Martin’s Keshun Reed holds the nation’s top finish in the 400-meter run at 45.75 and two other racers Saturday cracked the top 10 at spots seven and eight.
Isaiah Lucas of Cy Falls, first, and Marcus McWilliams of Pflugerville, second, and Chevis Armstead, third, are also awaiting decisions on their times being assisted by the wind for official finish spots in the 110-hurdles.
Will Watson of Belton placed the nation’s ninth best time in the 300-meter hurdles with a finish of 36.94.