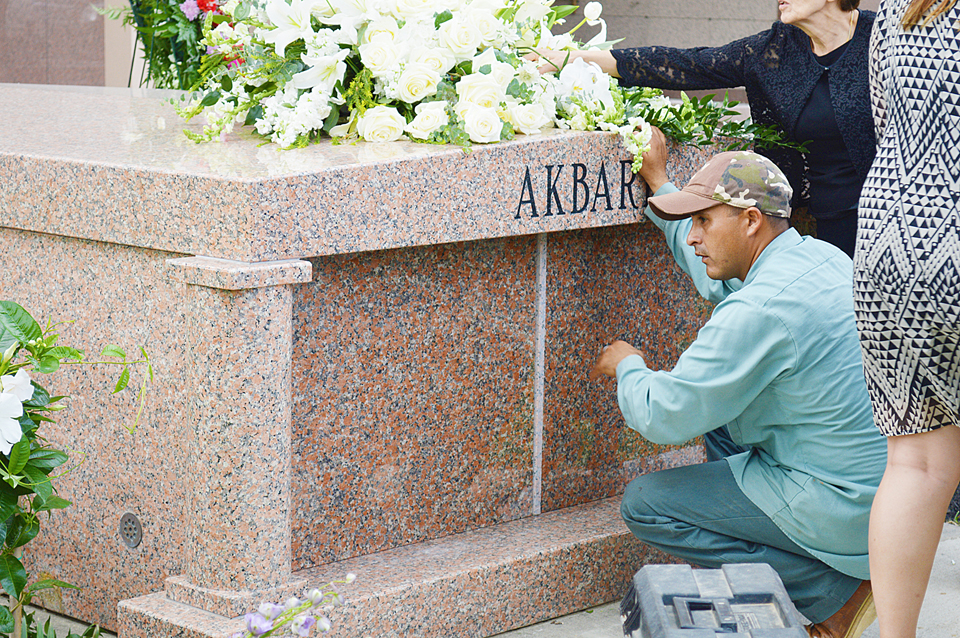 An Oak Bluff Memorial Park worker waits to put the "Forever in our Hearts" covering over the tomb for K.T. "Ike" Akbari, whose casket was slid into the left-hand side of the tomb after his funeral service Saturday in Port Neches, and his widow Cheryl.

The pews inside the mortuary chapel were full of Port Arthur and other city officials, business owners from around the Golden Triangle and residents who testified Akbari’s affordable housing — 39 properties with more than 4,200 units spread throughout Southeast Texas and Houston — kept their families off the street.

As the pews packed with mourners sitting shoulder to shoulder, the chapel filled to capacity — people stood standing along the back half of the walls, spilling out into the corridor leading to the chapel and finally, the main entry way.

A man traced circular patterns along his wife’s back, her head leaning against his shoulder, while “Amazing Grace” played over the speakers. A young boy in the second row of pews slowly waved a small, white flower in the air to the rhythm of the song.

“Y’all will have to forgive me,” Port Arthur Mayor Deloris “Bobbie” Prince said, crying. “The last time I felt this pain was a year ago with my mother. I loved Ike, and I know that Ike loved me. I had planned to go visit Ike this week. But he went to the extreme and visited us.

“Ike’s death is troubling me. I cry, but I’m not someone without hope. I know he’s left this world of pain and gone to a better place. Mae West said, ‘You only live once, but if you do it right, once is enough.’ Ike did it right.”

Port Arthur property owner Josh Allen said Akbari — who died of a prolonged illness at age 64 May 9 — was worthy of the room peppered with politicians, Housing and Urban Development workers and city officials.

“He was a hard working man who loved his family,” Allen said. “He contributed time and money to so many organizations. I think of Ike as being kind, compassionate. He will leave a legacy that all of us will remember. Thank you, Ike. I’ll see you later, buddy.”

Rev. David Edwards asked the mourners to join him in responsive prayer to beseech God to “open the gates of paradise” for Akbari.

“Into your hand, father of mercy, we command our brother Ike,” Edwards said. “We give thanks for the blessing you bestowed upon us in this life. Eternal rest grant unto him, oh lord, and let perpetual light shine upon him.”

More than half the mourners joined Akbari’s family — his widow Cheryl and two children, Chris and Crystal — at a brief funeral service at Oak Bluff Memorial Park in Port Neches, where Edwards sprinkled holy water on the closed casket and the tomb where Akbari was laid to rest.

Daniels gave Cheryl a crucifix bigger than her hand, and she clutched it to her chest while her mascara ran down her cheeks. Cheryl became overwhelmed with grief as the pall bearers slid her husband’s casket into the tomb that will house them side by side one day. She needed assistance to leave the cemetery for an after-service gathering in Beaumont.

Akbari graduated from the University of Tehran in 1975 with a degree in physics and math. He earned his masters degree in industrial engineering from Lamar University in Beaumont in 1977 and began working for Park Central Management, specializing in land use and development, that same year.

In 2002, he founded the Itex Group and immediately began expanding development of affordable housing, creating ICON Builders to handle complete construction of these facilities. His companies currently employs 160 people.

The family is asking for any memorial contributions to be made toward the Julie Rogers “Gift of Life” Program.