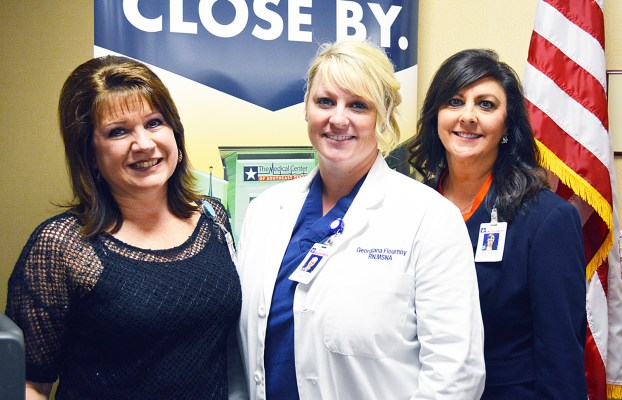 The Medical Center of Southeast Texas celebrated its 10-year anniversary Friday by inviting the community its staff cares for to a lunch program in the hospital’s auditorium.

“We are pleased and fortunate to be where we are today,” Gonzalez said. “We’re proud of being here all these years, and we look forward to providing quality care to our patients for the next 10, 20 years.”

Gonzalez spoke about the devastating blows Hurricane Rita delivered in 2005 — just five months after the Medical Center opened and took its first patients — which forced the hospital to close its doors for more than a month.

Medical Center directors Georgiana Flournoy, Joan Sheehan and Deena Brevell said they saw the destruction in the community — and the chaos in the hospital — first hand. They all came to the Medical Center through the merger that joined the Park Place and Mid-Jefferson staffs in April 2005.

“Evacuating the hospital for Hurricane Rita was 36 hours of running around with no rest,” Georgiana Flournoy, director of emergency and trauma services, said Friday.

“We had to discharge every single person in the hospital,” Sheehan, director of social and volunteer services, added. “We either had to discharge them to their own homes so they could evacuate with everyone else, or we had to transfer them to another hospital. No one could stay here.”

“We had to copy all the medical records to send with everyone, because nothing was electronic then,” Brevell, director of medical staff services, continued. “It was just chaos in her. We life flighted babies out on helicopters.”

Flournoy said one of the strangest things about evacuating in 2005 was having to walk through the brand-new hospital with all of its windows boarded up against the storm.

“Once we got everyone out, we had to keep making rounds to make sure that everyone really was out,” she said. “It was eerie walking through the halls with the windows boarded and everyone gone — like it was supposed to be abandoned, but we were still inside preparing.”

“I really do believe life is not run by chance,” she said, “because when Rita happened, Park Place was destroyed and Mid-Jefferson was badly damaged. If we hadn’t all been here at the Medical Center already, we never would have been able to re-open for patients so quickly. It would have taken months, maybe years, to get either one of those facilities fully functioning again.”

Brevell said the three of them hold a personal attachment to the Medical Center of Southeast Texas.

“We all have our names on a beam inside this building,” she said. “We all came down to watch our beams being raised up and put into place. We’re all very passionate about this place. And we’re committed to the patients we see.”

The Medical Center of Southeast Texas is located at 2555 Jimmy Johnson Blvd. in Port Arthur.

If you go: WHAT: Citywide Junior Ushers Crawfish Fundraiser WHEN: Saturday, 10:30 a.m. until 3 p.m. WHERE: Jay’s Custom Tires,... read more