See photos of what tornado left behind. “It sounded like a train,” resident says. 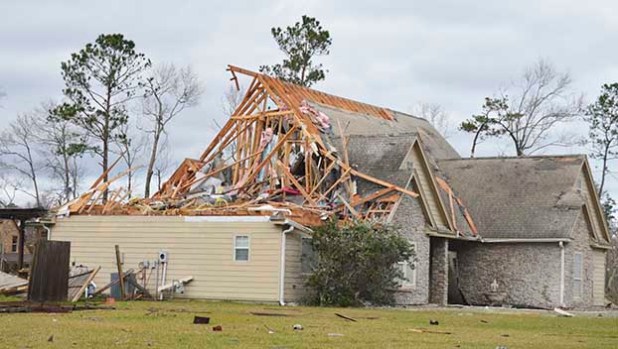 A home on Mica Circle was heavily damaged during the tornado. (Mary Meaux/The News) 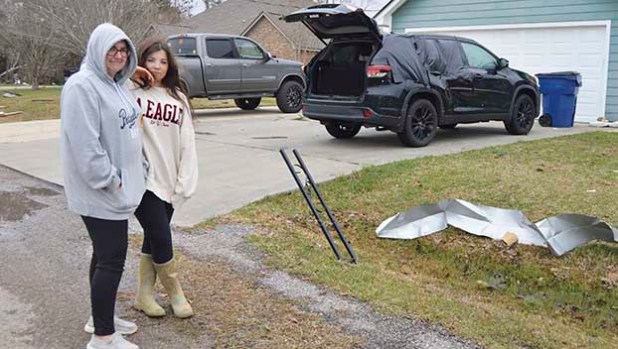 Valerie Sonnier, left, and daughter Chloe were out picking up debris left behind from Tuesday’s tornado in Orangefield. (Mary Meaux/The News) 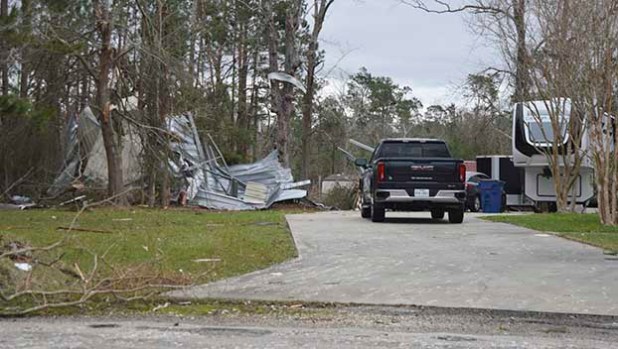 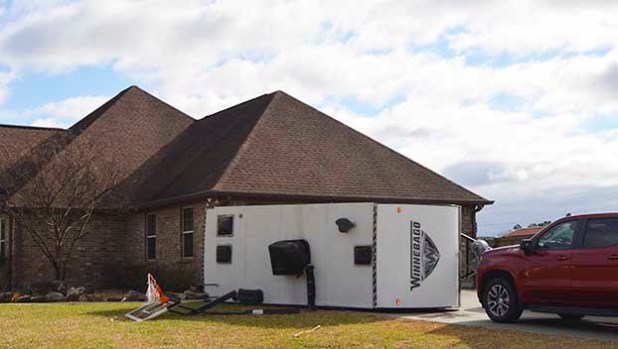 A Winnebago lies on its side in a driveway in the Bobcat Trails neighborhood of Orangefield. (Mary Meaux/The News) 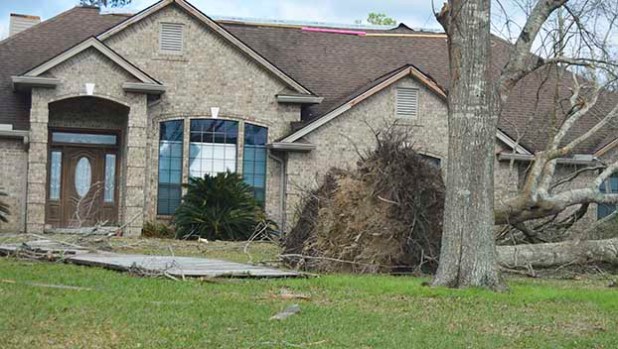 A tree was uprooted in an Orangefield neighborhood. (Mary Meaux/The News) 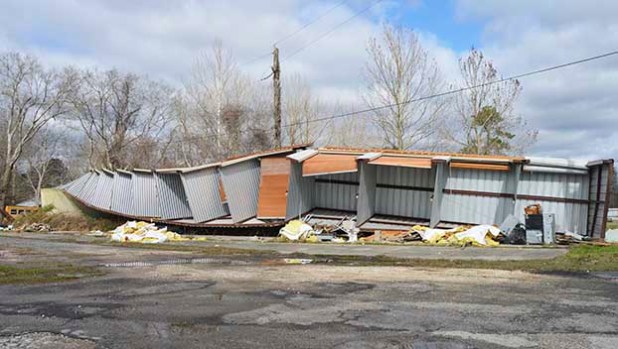 A storage facility on Texas 62 was damaged in the storm. (Mary Meaux/The News) 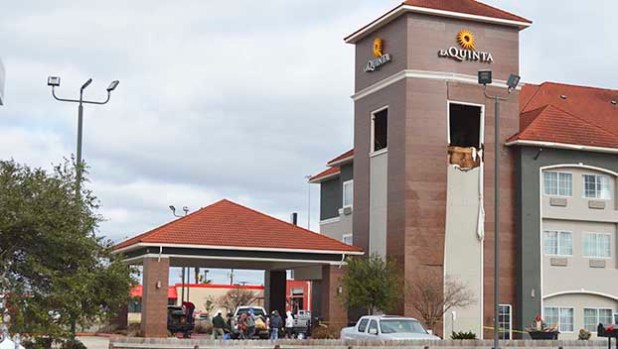 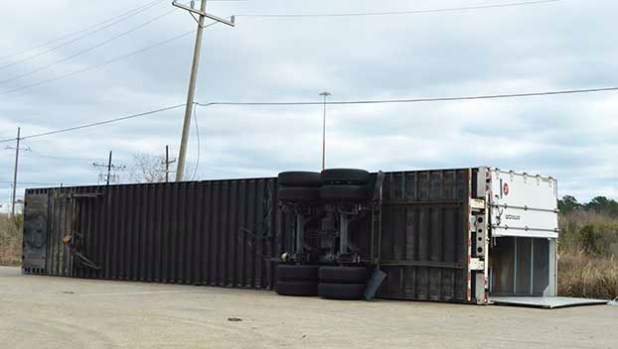 Part of an 18-wheeler was flipped near a business on Texas 62 in Orange. (Mary Meaux/The News) 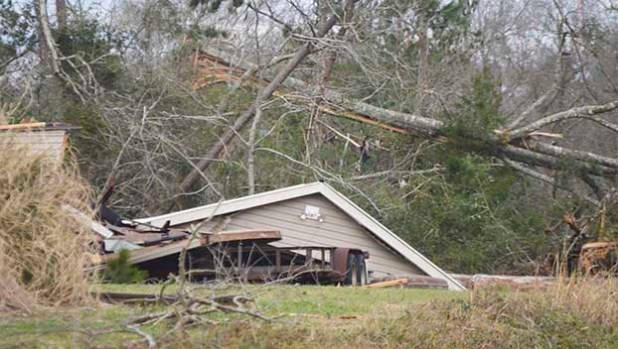 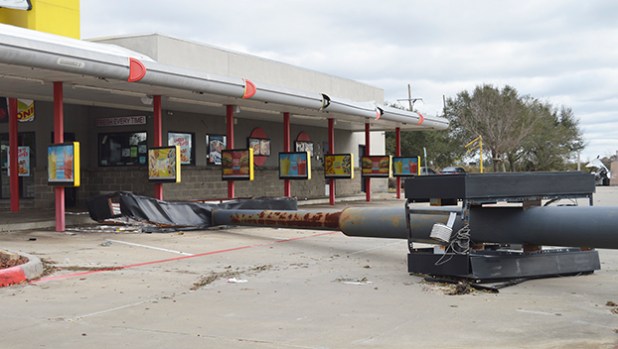 A tall pole at Sonic Drive-in on Texas 62 in Orange fell during the storm. (Mary Meaux/The News) 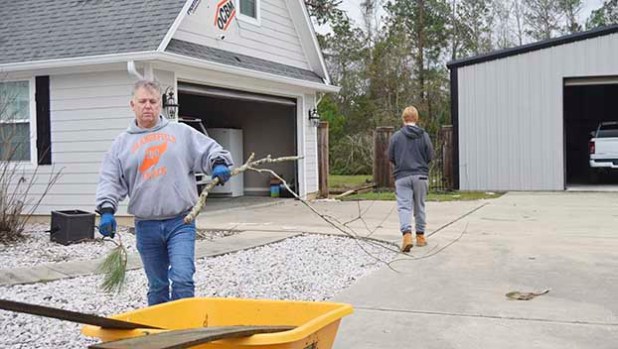 John Carroll picks up storm debris from his yard Wednesday in Orangefield. He noted his wheelbarrow was missing one handle after it was thrown during the tornado. (Mary Meaux/The News)

ORANGEFIELD — After receiving an alert on her phone, Valerie Sonnier’s daughter ran into their Mica Circle residence to warn the family of an approaching tornado.

Not long after, the Orangefield family was taking shelter in a closet as the tornado passed near their house.

“My ears were popping,” Sonnier said Wednesday while outside her home in the Bobcat Trails neighborhood. “There was a really loud rumble and shaking.”

The twister uprooted a tree in their backyard and left debris scattered. A window in one of their vehicles shattered.

Across the street, a two-story house was missing part of the top floor and back side.

Sonnier said some of the neighbors were in the damaged house when the tornado hit but no one was hurt.

The neighbors pulled together as soon as it was safe to walk outside and brought tote boxes and tarps to help them pack and secure belongings.

“This neighborhood, any time there’s a hurricane, comes together really fast,” she said.

Carroll said when he heard the weather alert, he and his family members moved to a safe area. Still, they could hear the winds from the twister.

“It blew the patio doors wide open and the pool furniture was thrown at the house. Now it’s two doors down,” Carroll said. “I tried to hold the doors but couldn’t because the wind was so fast.”

Damage to his roof allowed water to enter the home.

But, he said, material things can be replaced.

Like Sonnier, Carroll joined to help the residents in the near-by two-story house after seeing the extent of the damage.

“It sounded like a train,” he said. “I can’t imagine being in the house and hearing the main beams cracking.”
Debris tossed by the tornado was strewn in trees, bushes and the waterway down the road. A ditch near Cow Bayou held pieces of lumber, a gas can and an ice chest while a section of a roof was in nearby grassy areas.

More tornado damage was visible at Texas 62 near Interstate 10. A large metal pole laid across the Sonic Drive-In parking lot, and pieces of what appeared to be sheet metal was tossed around.

LaQuinta Inn and Suites next door to Sonic was also damaged and had repair crews on site Wednesday.

The trailer of an 18-wheeler was on its side in the park of Interstate Tire and Mechanical 24 Hour Road Service, and the awning at Pilot Travel Center was damaged.

Tornado advisories were issued Tuesday ahead of the storm by the National Weather Service as well as the Southeast Texas Alerting Network. Visit STAN.com to register for calls and text messages from local municipalities.