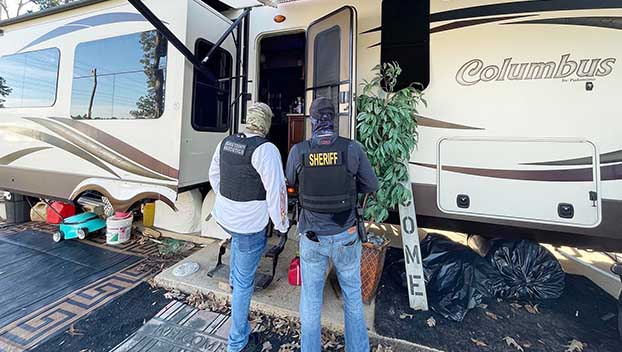 Law enforcement officers speak outside of a Palomino Columbus trailer linked to meth and fentanyl sales in Vidor. (Courtesy of the Orange County Sheriff's Office)

VIDOR — The arrest of a man and woman last week on drug charges, in theory, may have saved lives by taking the dangerous narcotics off the streets.

The drugs seized during the Jan. 12 arrest in Vidor included amounts of heroin/fentanyl and methamphetamine.

A detective with the Orange County Sheriff’s Office, whose name is not being disclosed due to the nature of his work, said drugs are poisoning the community. Fentanyl, a synthetic opioid, is especially dangerous in that even a small amount could kill someone.

The search warrant followed an investigation into the distribution of heroin and fentanyl in Southeast Texas near Vidor.

Besides the drugs found inside a trailer, law enforcement also allegedly found paraphernalia for distribution, including baggies and digital scales, as well as two handguns.

The detective has been in law enforcement for 12 years, but it’s only been in the past three years he’s seen the rise in the abundance of heroin and fentanyl. He believes this has a lot to do with the open border.

In the 12 years in law enforcement he had only found heroin twice; now he finds it on a daily basis.

He spoke of the opioid epidemic and how it spread, saying with prescriptions higher in cost, street level drugs are more potent and cheaper.

Dealers use different ingredients and a pill press to make the street drugs appear legitimate.

Fentanyl is sometimes used to cut the drugs, and users who are chemically dependent are at danger.

“We have started seeing fentanyl called ‘grey death’ that people are injecting into their bodies,” the detective said. “The people who are doing it say they are flipping a quarter.”

Fentanyl is used as an analgesic, and paramedics keep it on hand for traumatic injuries, he said.  And it is used as anesthesia.

“A small amount can kill you,” he said, adding those who are dependent on the drug build up a tolerance to it.

A gram, he said, is about the size of an artificial sweetener packet. This amount for people who have never used the drug is fatal and could kill at least 10 people.

Vidor Police Chief Rod Carroll can attest to the danger of the drug, saying they have had several deaths due to fentanyl. But a toxicology report can take two to three months to return to become available.

“It is also a danger to law enforcement when dealing with drugs cut with fentanyl; meth and heroin, fake Oxycontin and fake Xanax,” Carroll said.

When dealing with the drugs, officers make sure to wear gloves to avid getting the residue on their skin, he said.

The detective said police officers are continuing to target those selling drugs as well as those who may overdose to see if there is a link between the overdosed individual and the ones selling the drugs.