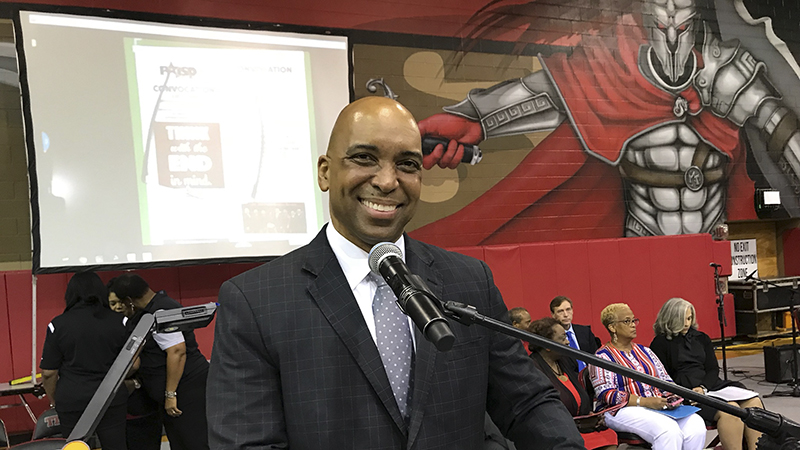 In less than one week, more than 800 people will gather at the Robert A. “Bob” Bowers Civic Center to celebrate Port Arthur during the 123rd chamber banquet.

And on that night, Dr. Mark Porterie will be receiving the 2023 Arthur E. Stilwell Award.

But recently while speaking with the devoted superintendent, he alluded to not knowing why.

“When I look at the slate of past recipients…,” he said. “They’re great people. They’re wonderful people. They’re the pillars, the foundation. And I’m thinking, ‘Wow, why would my name be with those people?’”

Quite quickly I told him he was one of those people, too.

“But they do so much,” he said. “Jeff Hayes, Sam Monroe, Carl Parker. I remember Carl Parker when he was a senator when I was a little boy. So to have my name associated with those types — Judith Smith, Hargie Savoy. Those people are tough.”

So it’s fitting that Porterie will be honored at an event that essentially embodies the importance of his work. The keynote speaker will be actor G.W. Bailey, a product of the Port Arthur Independent School District. Those who lead and work in Port Arthur will be gathered to celebrate the city. And, as Porterie said, every profession has to come through a teacher.

“We’re proud of the work we do,” he said. “It’s not all the time that people see what we do, but when the students get out and they start making names for themselves, that brings light to what we have done.”

We were meeting to discuss his award, but it’s always a pleasure to hear him speak. In both his words and actions, the Port Arthur native expresses deep love for his profession and his hometown.

“When an award is given in my name, it comes with all of us,” he said. “And that’s a great thing, because Port Arthur is a wonderful place. It really is. We have our challenges like everyone else. And some people don’t believe that. They think when things happen here, they’re not happening anywhere else in the United States. It’s just here in Port Arthur. We get mad. We talk about everybody. But it’s happening everywhere.”

And he’s always quick to give all of the credit to those around him.

Immediately I shared that I get uncomfortable when surrounded by people who are above my level.

“It shouldn’t be intimidating,” he said. “You shouldn’t be scared of people who are smarter than you are. You should be like, ‘Yes. I know them. They’re with me. They’re on my team.’”

It’s a team that was called the blueprint for education by Speaker of the House Dade Phelan and former gubernatorial candidate Beto O’Rourke. It shows in teachers like Yolanda Avery, who is deeply engrained in the community; and Myron Getwood, who has spent nearly 38 years teaching social studies to elementary students. It’s obvious in students like Alenka Porras-Lujan, who has secured more than $1 million in scholarships halfway through her senior year; and Memorial graduate Kayla Broussard, who last year secured a job with The Boeing Company.

Porterie is, undoubtedly, one of “those” people.