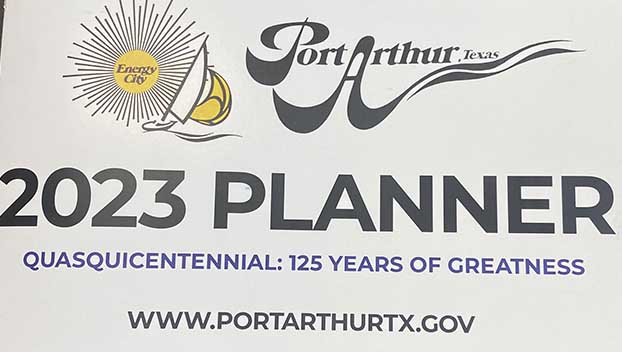 Planners are available at City Hall, Port Arthur Public Library, and the Chamber.

The Quasquicentennial Steering Committee this week brought updates before City Council just days before the first event of the year begins.

“We are indeed proud of the fact that Port Arthur has achieved an anniversary of 125 years,” said Albert Thigpen.

While at City Hall, Thigpen, Pat Avery and Verna Rutherford presented council with a Port Arthur flag — a task previously given to the committee by Mayor Thurman Bartie.

The committee was met with applause after unveiling the cloth.

“The flag has very special meanings for the emblems that are on there, and that’s going to be part of some contests we have coming up for people to remember that,” Thigpen said.

Rutherford said they are in the process of forming committees within the group.

“There’s been a lot of activity and discussion, certainly a lot of enthusiasm by many people,” she said. “We’re really excited and looking forward to it.”

Avery previously told Port Arthur Newsmedia that 2023 will be a “big, big year” in Port Arthur as they prepare for the celebration.

The first event with be the annual banquet for the Greater Port Arthur Chamber of Commerce. The sold-out event begins at 6 p.m. Thursday at the Robert A. “Bob” Bowers Civic Center.

The committee plans to host events every month, with a large celebration taking place in October.

On Tuesday, members said city employees Pamela Langford and Shanell Perkins, along with Gerry Dickert of Lamar State College Port Arthur created a planner to pay tribute to the last 125 years. The book has historical facts and photographs throughout.

“When you have an opportunity to go through it, you’ll get a chance to see the information that is contained therein,” Thigpen said.

Planners are available at City Hall, Port Arthur Public Library, and the Chamber.