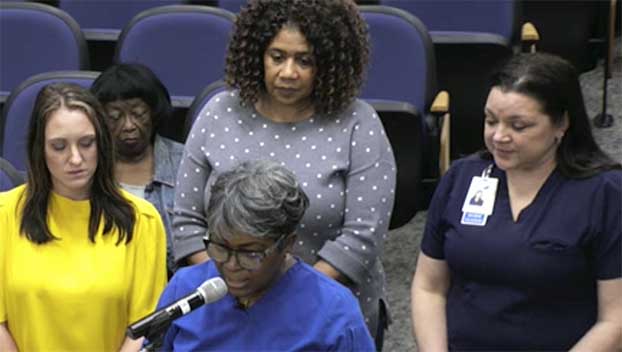 Connie Wiltz said the concern with the rise in violence against health care workers isn’t just in the increase, but the number of unreported altercations.

“We want to help these people understand and realize that it is a crime and it should be reported,” the nurse practitioner said this week as she stood before the Port Arthur City Council.

Wiltz was among a group of health care workers from the Golden Triangle Emergency Nurses Association, which serves Jefferson, Orange, Hardin, Jasper and Newton Counties.

“Violence is taking on a new trend, and when it comes to health care workers, the trend is on the rise,” she told council and city staff.

“There’s a new statistic that showed an average of violence against health care profession is at a 12-time national high from any other profession.”

In mid-2022, a patient in Tulsa, Oklahoma, bought an assault-style rifle and went to a medical facility where he fatally shot two doctors, a receptionist and a patient before shooting himself.

Later that same year, a nurse in Durham, North Carolina, was fatally stabbed by one of her patients at a facility for mental health, disabilities and substance abuse issues.

Also that month, a nurse and social worker in Dallas were shot to death in the labor and delivery department.

“At my facility, there are very few workplace violence reports, and that’s why we want to educate our health care workers to identify, understand and speak out on this topic,” Wiltz said.

However, she added, she has colleagues who have been physically threatened and stalked.

In 2013, then-Governor Rick Perry signed into law legislation that made assault against emergency department personnel a felony offense.

However, health care company Press Ganey Associates polled 483 facilities nationwide before publishing data that says, in the first quarter of 2022, more than 5,000 nurses were assaulted at their workplace.

During Tuesday’s meeting, Mayor Pro Tem Ingrid Holmes read a proclamation making Jan. 17, 2023, Violence in the Workplace Day before thanking the group of health care workers for attending the meeting.

“I think all of us may not have been aware of what kind of violence goes on,” Holmes said. “We hear what we hear on the news, but we don’t know what happens in our local areas.”