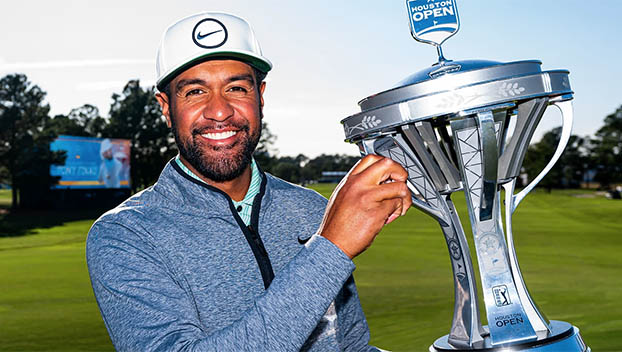 Tony Finau cruised to a victory at the 2022 Cadence Bank Houston Open, finishing with a four-stroke lead at 16-under, earning his third PGA TOUR victory. (houstonopengolf.com)

Astros owner Jim Crane is apparently tired of playing nice with the PGA Tour about getting the Houston Open moved to a spring date and away from competing with football in the fall.

As a result, there likely will not be a tour tournament in the Bayou City in calendar year 2023.

Take it from folks in Major League Baseball who have watched Crane turn the Astros into a dynasty of sorts during his 11 years of running the team, this is not a man to be taken lightly. If he says he wants his PGA event staged in the spring, that is exactly what needs to happen.

Just cut the red tape and the BS and get it done.

Expect that to transpire sooner rather than later, which is a major reason why there is no Houston Open listed on the recently released 2023 tentative fall schedule. Those capable of reading between the lines say it’s because Crane delivered a high, hard one about spring 2024 and the message landed.

Part of his no-nonsense approach, according to Golf Digest, was Crane and his right-hand man, Lamar grad Giles Kibbe, playing in the LIV Pro-Am before its Boston event last fall. Then there was the leak about LIV defector Dustin Johnson, a member at Crane’s Floridian National Golf Club, pressing for an LIV event in his name at the club.

According to the report, Crane turned DJ down. But the PGA Tour, amidst its ongoing public relations war with LIV, no doubt took note. Houston, after all, is America’s fourth largest city, has a steady history with the PGA Tour dating back to 1946, is vital to the tour in a time of turmoil and boasts a leader you probably shouldn’t put on hold for long.

Crane, of course, more or less salvaged the Houston Open back in 2018 when there was a very realistic chance it was going down the drain. Its heartbeat, the Houston Golf Association, was fading away. There was no longer a sponsor, and San Antonio’s Valero Texas Open took the tournament’s all-important pre-Masters date.

A serious golfer who once owned a mansion overlooking Pebble Beach, Crane rode to the rescue. He accepted a demotion to the fall, secured sponsors and pulled the strings on a massive upgrade of the city-owned Memorial Park Golf Course as the future playing site.

Memorial Park, as golf historians can tell you, was where Byron Nelson defeated Ben Hogan by two shots to win the 1946 Houston Open, which is pretty much acknowledged as the tourney’s launching point. Since then, it has bounced around to a dozen other courses, with the longest run at the Woodlands TPC from 1984-2002.

Anyway, the thought of no Houston tour stop, or one of secondary status, is totally unacceptable in golf’s big picture. Crane, who obviously is a visionary, saw that right away and doesn’t intend for it to happen, or ever get to this point again.

Besides Crane putting his foot down, the reason for no tourney this fall is because it would be too much to turn around and stage another one four or five months later in March or April of 2024. So, you can take it to the bank there will be a significant PGA Tour stop at Memorial Park in one of those months.

That’s more of a sure thing than the very real possibility of another Astros World Series title in 2023.