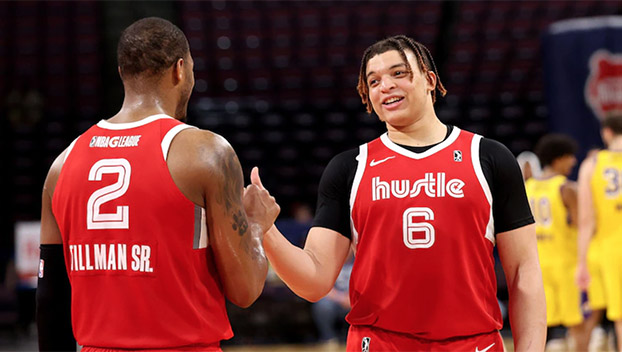 Before tipoff of Monday evening’s NBA special Martin Luther King Jr. telecast, the Memphis Grizzlies announced players who would be active and inactive.

Hoops fans were excited to see that Memphis star guard Ja Morant would be available.

A deeper look at the release noted rookie Kenneth Lofton Jr. would be inactive.

That surely caught the attention of Port Arthur and Southeast Texas sports fans, because it meant the former Memorial High School standout was promoted to the big club’s extended roster.

Ultimately, Lofton did not play in Monday’s game (a dominant Memphis victory), but the team’s official social media accounts showed him celebrating with teammates on the court after the win.

Shuttling between the NBA G League Hustle and big squad Grizzlies has been a constant this season for the rookie Lofton, one year removed from his college playing days at Louisiana Tech.

He was not selected in the 2022 NBA draft but immediately signed with Memphis and been a major contributor for the Hustle in Year 1.

He is featured prominently on the team’s website — memphis.gleague.nba.com — and routinely shines on the floor in game action, where he is averaging 17.7 points, 9.4 rebounds and 4 assists per game.

He has also seen action in 6 NBA games for the Grizzlies, where he has scored 15 points on the season with four rebounds and four assists.

In a story published last week on slamonline.com, Lofton was hailed as an “NBA G League Player to Watch.”

In the article, Lofton was noted for his soft touch in the paint, crafty spin moves and an impressive passing ability.

“And now, with the Memphis Hustle, the Grizzlies’ G League affiliate, he’s adding to his arsenal. After taking just 20 total threes in college, the rookie is currently averaging over 4 attempts per contest. He shot 50 percent from the field and 36 percent from behind the arc in December, averaging 21.2 points, 8.9 rebounds and 3.2 assists to lead his team to a 7-2 record,” the story noted.

The early success is the result of hard work and achievement at all levels. Although humble in speaking about his abilities, Lofton is confident in his talent.

During media day before the start of the professional season, he noted he was very grateful and thankful for the opportunity.

“Going into Summer League, it was great overall,” he said. “Memphis has been great, overall. I came to play my role and be ready when my name is called.”

The rounds of interviews also give the chance for local journalists to learn about his journey to the NBA.

“Up to high school, I wasn’t that tall,” Lofton said. “I was only about 6’2.” Going into my senior year, I grew to about 6’6.” I was playing point guard in high school. All four years I did everything. When I got to college, my coach was hollering that he needed a four and a five. I need someone to play. I told him I would play it. I just knew post moves, so I did them. I just adjusted to the game and put it in one bag and used it.”

That can-do attitude is earning the Port Arthur-bred star more opportunities each month as a player.

2023 promises to be a big year in the young professional’s life.