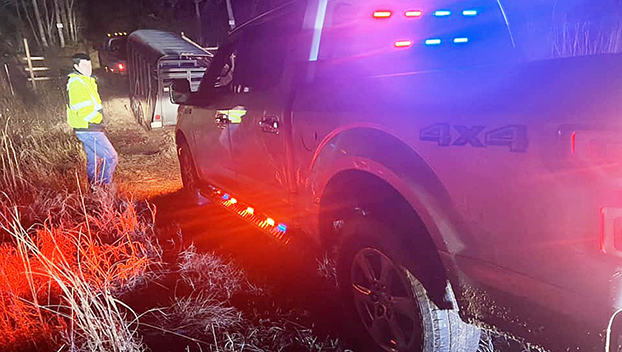 A truck and livestock trailer was stolen Friday in Orange County. (Courtesy photo)

VIDOR — Officials are searching for the person or people who stole a truck and livestock trailer and fled when it got stuck on a rural road.

Constable Matt Ortego was on his way home at approximately 9:40 p.m. Friday in the 1100 block of Orange Street when he saw a white F350 pulling a livestock trailer.

He recognized the vehicle and trailer as belonging to a local man and called him. The owner noted the vehicles were not at his home and Ortego began to follow the truck, he said. 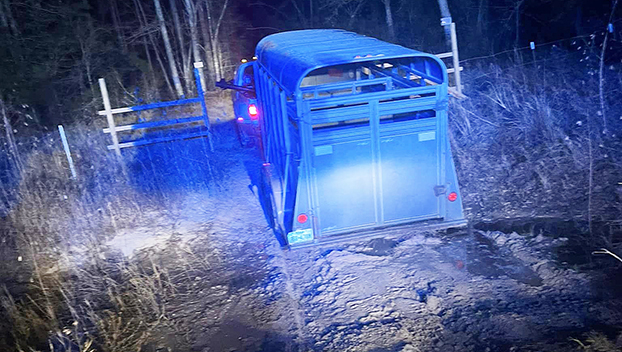 The stolen livestock trailer sits where it was abandoned. (Courtesy photo)

The constable said he activated his lights and attempted to stop the truck on Sergeant Street, but the driver did not stop, leading to a short police chase.

Ortego said the driver of the truck ran several stop signs and at one point cut through a parking lot before the leading officers down Fox Road in Vidor.

The truck drove through a cattle gate; and, at the end of the road, there was a deep dip and a stump. The trailer got stuck on the stump and the suspect or suspects fled on foot.

Ortego said the driver had no regard for other commuting motorists during the chase.

The truck and trailer were recovered.

Ortego said the ignition on the truck had been damaged.

The Vidor Police Department and Orange County Sheriffs Office attempted locating the suspect(s) this weekend but were unsuccessful.

No arrests had been made as of Monday afternoon.